We had roofing, gutters and siding put on our house and are paying a pretty penny for all of it. Piece of the drip edge are are bent and coming up. There’s a huge hole between siding and gutter where critters can get in. Bent and gouge framing around the windows that were just installed… the list goes on. We politely let the Owner know that we did a walk around and would like for him to stop by and address the issues. And everytime we bring up an issue with the work, he gets very argumentative as if everything is perfect and that his workers did nothing wrong etc. He wants to fill a hole with silicone. I will post one of the pics. This is just one of many things that need fixed before final payment. How do you go about an argumentative roofing company owner? This is becoming so stressful. 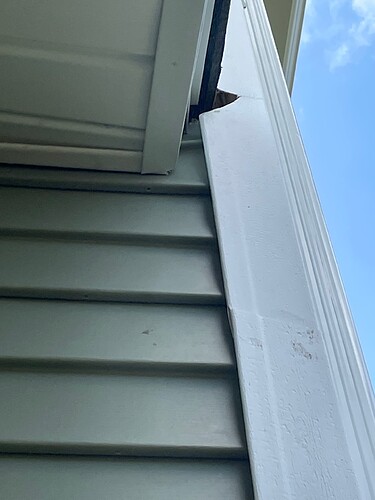 Not too mention we picked up 20 nails and over 10 cigarette butts because they didn’t clean up the job site….

You need to make a detailed “punch list” and stick to the list. Share the list with your contractor and withhold a reasonable portion of the payment until the issues are resolved. The complexity arises in discerning whether the issue is real or whether you two are now embroiled in a “pissing match” and everything becomes problematic from your perspective, and unreasonable from his perspective. It sounds like objectivity, from both parties, has been tossed by the wayside due to the strenuous dealings thus far? In circumstances where an impasse seems imminent, it is a strategy to contact the supplier, or manufacturer’s rep, of the installed products and ask whether the product warranties will be honored given the current state of the installation. This can trigger a joint inspection of the completed tasks while confirming installation was done according to spec. It also tends to bring the contractor to greater account as they prefer to not be embarrassed in front of their supplier.

Sorry to hear of your troubles and good luck!

This is a great point to contact the manufacturer and see if it was installed properly. I would love to have them come inspect it because they cut the other side properly. I just don’t see how a business owner thinks newly framed windows that have been gouged down to the metal by the person who installed it is normal. Anyway we will be having those replaced