Can asphalt and metal roofing meet in a valley

Hi guys. I’m a homeowner that had a porch with metal roof added to the front of our house. The roofing company just came and installed the roofing. I think it looks odd that they removed some of the asphalt shingles on the garage roof and replaced it with metal where the porch and garage roof meet. My question is can asphalt and metal roofing meet at a valley? Hopefully I’m explaining myself well enough. I’ve attached a picture that should better explain it. Thanks so much for your help. 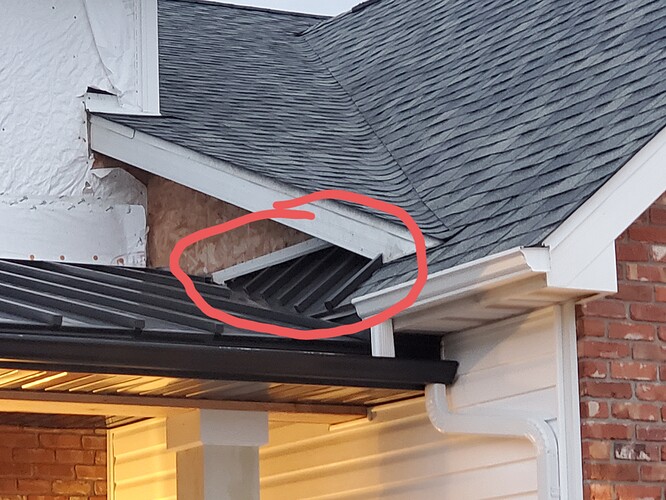 They did a really nice job for you and took an extra step to make it look it look good. Yes Of course they can meet in a valley and they did you right.

I completely understand your feelings.
You just really didnt know what you wanted and neither did the roofer.

You have seen really nice homes with metal accent roofs on the front porch only or a front bay window or only on a gazebo section.

And now you feel like it doesn’t have that look
And you just did half a roof in metal and half in shingles making it seemingly look odd.

You asked the roofer about it and said you didnt like the look and you only wanted the lowest section done.
He wishes we would have know that because he would have saved a lot of money and time.
He would have took 10 minutes to shingle the area instead of hours.
He doesnt want to redo this area for free.
Its not fair. And will cost him money.
So he tells you shingles and metal cant mix in a valley.
Yes, it can be done.
But he deserves to be paid to redo it.

It was just bad communication and neither knowing exactly what you wanted until it was all over.

It doesnt look bad. They did a good job.
I would keep as is.