Wondering how many of you may have come across a similar shingle as shown in the photo here: 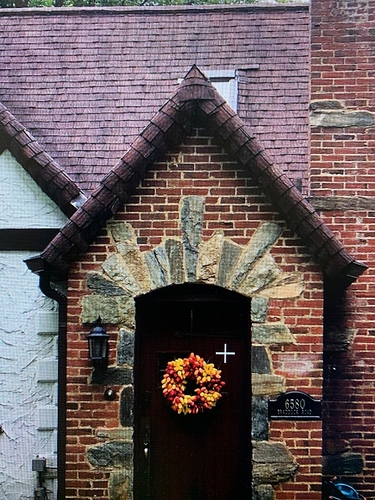 Homeowner is interested in keeping the new shingles wrapped around the half-round rake boards (excluding 3-tabs) and the manufacturer’s have only come back with CT Northgate so far as a recommendation. Anyone have other suggestions?

That is an old Pabco Horizon, a surprisingly good shingle although we whined like babies when we had to install it. Didn’t break apart in bundles well and was an architectural that needed a traditional 7 Pc book cut because of the slots. I was a 20 year old prima donna so I probably complained about all piece rates then! I think we were getting $7 per square to install it. It seemed like a crappy shingle but lasted a crazy long time. Typical Pabco.

So it’s actually a CT Hallmark Shangle according to local sources around here. Relatively new to the industry, so haven’t heard of Pabco Horizon

It’s a Certainteed Hallmark for sure.

If im not mistaken, Genstar (GS) came out with that tiger striped Shangle right before the certainteed buyout. I thought it was a 40yr product then. I’m just impressed they wrapped that rake like that.

Thanks guys. Any suggestions on which existing shingles may be able to wrap around like this effectively? As mentioned, the Northgate was the only suggestion so far, given its rubberized composition.

It’s a rolled rake,it’s built rounded and would have originally had cedar shingles. They look really nice in cedar, and stupid in asphalt. Few of them around my way

Guys around here use regular laminates on them, I wouldn’t want to do it in the cold,and I don’t think the thicker products like pro landmarks would take well to it.

My mistake. Not familiar with that one

Thanks patchap. GAF is telling me they don’t have anything they would install that way, regardless of the weather. I’m thinking running IWS along all the rakes would be a good idea if we had to go with asphalt shingles and wrap them around, even if it is with ones pliable enough to wrap around there. Anything else you guys can think of to handle that area?

Try OC Duration Flex. It’s their new SBS shingle. There’s videos on YouTube of them rolling the shingle up in a tight roll and laying it back out. Doesn’t crack at all.

Those look to be the burnt siera landmark shingle this would be the best match.

Certainteed Hallmark “Shangle” - they have not held up well in northern climates in my experience - the patterns disintegrate.

You might try using copper-laminated shingles - I have seen those being bent fairly sharply. They turn a nice brown with hints of green as the copper tarnishes.

BMI Group is the largest manufacturer of flat and pitched roofing and waterproofing solutions throughout Europe with a significant presence in parts of Asia and Africa.

The Hallmark was just bad all the way around, they curled up and the granules popped off in large chunks.

These were one of the most expensive shingles of it’s time and they usually started falling apart in 12-15 yrs, sometimes sooner.

I have replaced several Hallmark roofs.

Agreed - I have seen the same in these shingles- just junk.