We just had our roof replaced due to hail damage on our 1989 contemporary style house. There are three edge conditions that occur on a sloped and angled (inward) roof area where we did not used to have issues in the past, but do now with the new roof. Basically, rain water now flows right over the edge and creates a water curtain effect falling off the roof onto our deck. Previously, I don’t recall this happening and felt that the rain water was kept onto the roof and pushed inward until it reach the gutter at the bottom. I’ve argued with the roofer that this is a new issue from the new roof, but they just keep saying it’s not their problem and they put in the same thing that was there which is a standard edge detail with the shingle hanging slightly off the edge and then a drip edge. I tried to explain that since this roof is angled inward, their standard drip edge is not the right solution. Unfortunately I didn’t take before pics of these three edges. I was hoping to see if anyone had any ideas for the right way to handle this. I’m wondering if a drip edge with a small gravel stop would make sense or something like that that keeps the water on the roof so it runs down to the gutter at the bottom. Below is a picture of two of the edges on the back roof (the other edge is on the front roof). 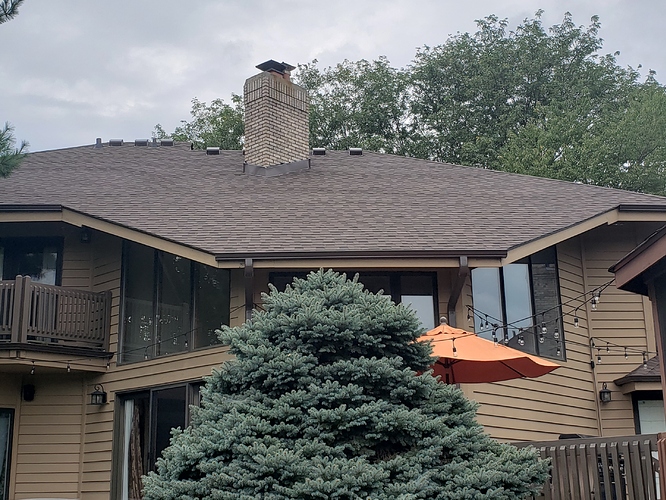 When we run into a flared Gable, we will install gravel stop that is 2-plyed with Ice & water. It’s a pain in the butt for the roofers but makes sense in this situation. Technically they didn’t do anything “wrong” here… They just didn’t offer you the best solution. Possibly offer to split the difference to get the roofers to come back and do it the “right way”.

There is no way that you could convince me to use a drip edge with a gravel stop on a shingle roof. Shingles are designed to shed water they are not water proof. With a gravel stop you’re encouraging water to build up and stay on the roof an unnecessarily long time. If you’re in a snow area it could cause ice dam issues also. Are you 100% sure this is a new issue? People hardly ever seem to notice roof issues until their roof gets replaced in my experience. IMO your only real options is to install gutters in those areas also or just live with it.

Definitely sure it’s new. The front edge is over landscaping, which now has a small ditch where the water is falling on it. There’s also a good size puddle/pond in that location when it’s a heavy rain that we never had. Pretty sure the deck stain in the back is going to have lines on it under those two edges in about a year.

I could see where a gravel stop would retain water on a low slope or flat roof, but along these edges it’s a pretty good slope, so I wouldn’t think the stop would do anything but prevent the water from going over that edge and directing it towards the gutter below.

Yes but you are still encouraging the water to build up and stay on the roof longer than necessary until it reaches the gutter. Next thing you know its being diverted under shingles at butt joints and such. Its just asking for trouble imo.

I can’t believe it didnt do this before the roof was replaced. Why don’t you have a gutter guy run up that rake on both sides. Other choice would be a big diverter. Fabricate a small piece of C, channel slipped up behind the face of the drip edge. I can’t see that this would be the roofers fault. You obviously dont like the results, so see what they can recommend. Was there a diverter there before and they left it off?

Do other homes in your neighborhood have this detail as well? Maybe there was a detail that was present that you did not notice before?

Did they actually say “it’s not our problem” or is that just a loose translation? If they used those exact words they won’t get many referrals with that strategy. There should be a gutter installed there, regardless of what you had before, and if it was my company we would just install it to avoid conflict and secure a lifetime customer. It would cost us about $150 and solve the problem.

If you want root cause problem, it is the architect that designed that roof. Looks nice, functions very poorly. I don’t see how you can blame the roofer. While I wouldn’t like to do it, a couple of rain diverters angled as steeply as possible would likely solve the problem. I don’t like the look of gutters on rakes, especially at that steep of an angle. Further, with the long rafter lengths, the water would run over gutters on the rakes in a hard rain (as it would with rain diverters as well.

Agree with Island on the water retention problem. Custom break diverters out of .032 gutter coil with the flat flange trimmed on an angle. 1 1/2" diverter leg with 1/2" hem will leave 13" of stock on the roof. Subtract 5 1/2" to run under a course of shingle, and an angle steep enough to self clean will still leave 4" +/- exposed aluminum on the high side.