I recently had my tile roof replaced with shingles and the roofer (a well regarded one at that) failed to put a furring strip on the edge of the fascia before installing the drip edge. As a result, everytime it rains the water doesn’t break cleanly off the edge of the roof (4/12 pitch) but rather follows the drip edge all the way down and runs along the fascia where it finally breaks off the bottom of the fascia. A few years of this and I will be replacing fascia not to mention dealing with nasty looking stains. So I need a solution.

The roofer is claiming the roof was done right. Maybe according to code, but the craftsmanship sucks. My fascia shouldn’t be taking all the roof runoff. Short of refusing to pay until its done right, I have come up with a couple solutions which I have attached below. Im curious which one you guys think will work best or if there is another option I am not considering.

On the diagram I also indicated how they would be fastened. 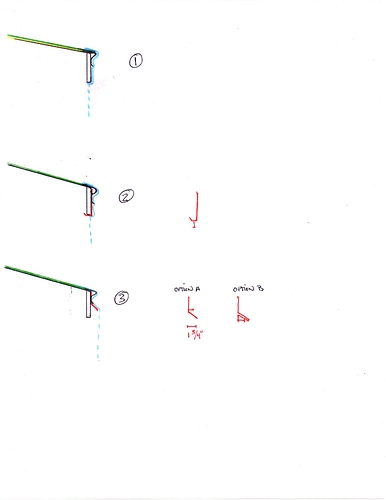 What state are you located in? Shingle manufacturers recommend overhanging your shingles out over the drip edge to avoid this, however in Florida (stupid roofing code central) they can fail your roof install if you do this.

How was the bottom of your roof done back when it was tile? While I think a great roofing company would have saw this potential issue beforehand, I don’t think I would consider this roofer negligent in this situation. I would recommend staying calm and trying to stay on good terms while this issue gets resolved.

p.s. I would recommend the aluminum fascia out of those three options. I think the roofer will probably bite the bullet and do it to avoid hurting his reputation.

I’m in Flori-duh. And yes, the shingles were cut flush with edge of drip edge (d-type drip edge). The fact that the shingles are flush and the lack of a furring strip means there is no hard edge to break the water which holds onto the house all the way down to the bottom of the fascia. Im not sure about negligence… if a roofer has been in business for 30 years one would think they would spot this problem right off the bat. He replaced over 2000 dollars worth of rotten fascia so it seems like soaking wet fascia is good for his bottom line.

The aluminum fascia cover seems to be the conventional solution. My concern is that it does nothing to kick water away from house and it would quickly be covered in brown stains from roof runoff. Is there any real drawback to option 3? Seems like it would be a natural precursor to putting gutters on if I eventually went that way…

Another concern I have is regarding the roof vents installed. I have drawn a picture of them. My concern is that they create a wall on the roof that the water will pool against. They are about 6 inches high and completely square along the back…like a wall. See diagram. 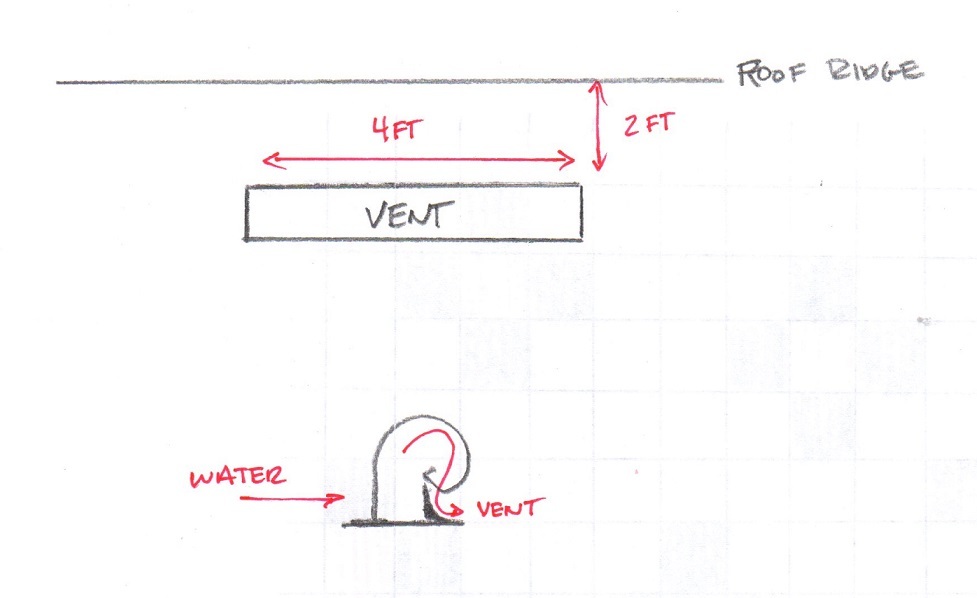 The problem doesn’t lie with your roofer you can blame the State for not allowing roofers to correctly install asphalt shingles.

The shingle is supposed to have a 1/2" - 3/4" overhang of the drip edge so that the water will drip off away from the fascia, it’s in the instructions on the package.

From what I understand it is against code in Florida to do this, you probably should have replaced your fascia with the plastic stuff instead.

I agree and disagree. Certainly hanging shingle over drip edge would have helped, however a furring strip would also solve the problem. Either way, having water coursing down your fascia is BS and sloppy work. I have been reading about roofing for about a month and already know that he skipped a crucial step. Just another example of the decline of American craftsmanship when a DIYer can easily diagnose and point out flaws in a roofing system installed by an “expert”

Thought of another option…does anyone see any problem with jamming a furring strip under drip edge all the way around the house and sort of bending drip edge out? This wouldn’t solve getting the top shingled edge of drip edge out any further out from the fascia, but it would make the bottom kick more pronounced and hopefully stop the water from running down the fascia.

I have also considered gutters but the only way to install them would be to slide the back edge of the gutter up under the drip edge. I’m not sure how to mount them like that without putting holes though my drip edge and my other concern with that setup is that in heavy rains (pretty common in Florida) the gutters would fill up and allow water to back up or backflow under the drip edge and run down fascia from behind

Need to get something going before rainy season starts and would like to make sure my solution works the first time and lasts for the next 15 years.

The aluminum fascia cover is probably your best solution.