Appreciate any feedback on this roof job. Roof is still letting water in, sloppy job all around. Can only add one picture per post so I’m including a public google drive share with some additional photos.

Had a new roof installed a few months ago topped with EPDM. $5,500 job. We had water leaking issues below this roof prior to this roof install. Roofing company was aware and thus hired to address them with essentially a whole new roof.

Recently found out water was still getting through. After a heavy rain a few weeks ago we saw water trickling down the wall of a room beneath the roof. Also started noticing additional bubbling in the ceiling and walls. Took a bunch of moisture readings. Most areas were getting double-digit readings, some areas maxed out at 33% moisture.

Got the roofers back out here. The guy pulled back part of the EPDM coating, which is right above the ceilings/walls the water is coming through, and this is what we saw: 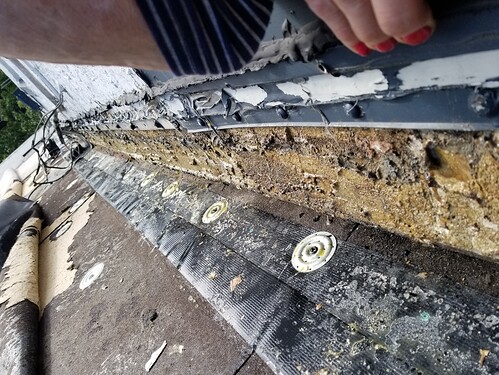 It’s clear they did not properly repair/prep/clean this roof prior to laying the epdm. Had them redo/repair this part but we’re questioning the entire install at this point. Still getting double-digit moisture readings in parts of the walls and ceiling below.

Slowly losing my sanity here. Here are some additional pictures:

Did they use solvent or water based bonding adhesive? Are the leaks in the same places as they were before the new roof? EPDM has a very low perm rating, E.G. moisture in the system cannot get out, so you’re creating your own stress by running moisture readings, stop.

It looks like the wall termination wasn’t done correctly.

The EPDM shouldn’t detach from the perimeter strip without great effort (if at all) and probable damage to the membrane.

It appears as though it was pulled back without removing the termination bar?

I didn’t notice that but it appears that way. Here’s another shot of the part that got pulled back. 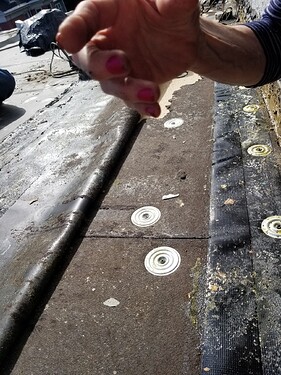 Again, the water issues precede the latest roofing job, so it didn’t start with them, but it’s definitely continued. These guys should have repaired/replaced that entire stretch of wall before covering with epdm, not just left it open and exposed like that, right?

For reference, here is what the ceiling/wall of the room underneath looks like as of ~3 weeks ago, before they came back and redid the part along the wall. You can see some water coming through in one of them.

Happy 4th by the way.

The leak question was to determine if the original leaking was actually from the replaced roof and not from the roof/wall above. If you locate the leak before you throw a new roof at it, and determine if it is a repair or replace, all problems will be solved. Shotgun solutions are worthless.

Leaks are in the same area; bubbling/water spots have just been gradually expanding. Not sure about the adhesive, I will have to check the job spec details. We believe the culprit is this stretch of roof where the wall/roof meet, which is the part they came back and redid recently after we told them we were still getting water. 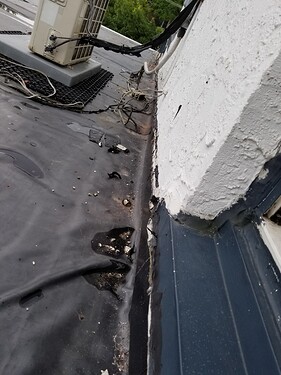 Here is where the damage is, which is just below that area. The damage extends into the adjoining room’s ceiling as well. 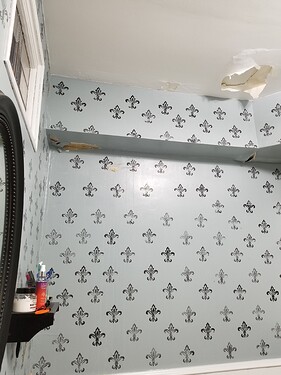 I’d throw a ladder to the roof above that wall and inspect that one.

We are definitely getting a few extra sets of eyes on this one. The company wants to redo, but honestly my trust/confidence in them is pretty low at this point.

The roof was installed wrong. They either didn’t adhere the membrane everywhere or they didn’t let the adhesive flash. The wrinkles and bubbles are from that. They did not water block and terminate the wall as they should have. With the irregular surface you will never get rubber to seal the way they installed it.

I looked thru the folder and while I have seen worse, this was a terrible installation. That said most of the water is going to be coming in from the wall flashings not being terminated correctly.

Thanks for the feedback. Getting straight answers from these guys has been next to impossible. When we questioned the condition of that wall termination they redid a few weeks ago, they said they installed the termination bar correctly but they think it came out because it had a loose connection with the brick. Also said they redid the wall flashing and applied water cut off behind the termination and lap seal on top so no water gets in.

Pictures of their redo job, which needs redone again… 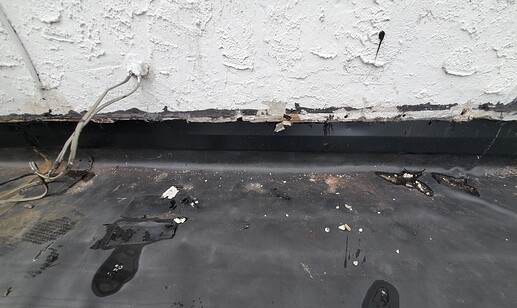 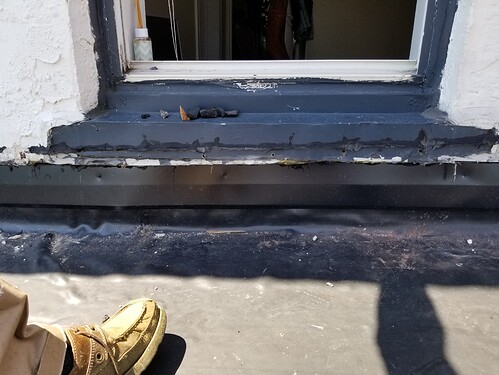 Like you said, it wasn’t water blocked and terminated properly, which is an issue they’re trying to dance around now because it’s something they failed to do/didn’t do right during the initial install.

All the reading we’ve done on epdm roofs points to poor installation being the reason for excessive bubbling/wrinkling. We’re aware some bubbling can occur in hot temps. But it’s definitely not normal in our case, despite them telling us it is. They also tried telling us that the facer under the membrane they pulled back was dry and wasn’t an issue.

As far as I’m concerned, this isn’t a matter of just having them come back and redo this as they’ve offered; we’ve had water getting in under this roof for who knows how long. So we’re back to square one: we need the whole roof inspected again to see whether additional damage, rot and whatever else, occurred since the installation ~6 months ago. And to make sure leaks aren’t coming in elsewhere. I’m almost afraid to see how the rest of the roof looks under there.

I would agree there are a lot of bubbles in that install but doubt that is causing the leak. The connection at the stucco is bad looking and a proper counter flashing could possibly solve that.
Also what is with the romex wire coming out of the stucco?

If possible tarp the section where the epdm meets the stucco for a temporary experiment. If the leaks stop you at least know what to address.

EPDM does not leak unless cut or penetrated, the problem is where it meets other substrates.
Keep in mind stucco can also leak thru, and the flashing at the top of that stucco “wall” maybe the cause. Once it is behind the wall finish no amount of flashing is doing anything.

Yeah the wiring is a little messy. The previous owners had a couple outlets and an AC unit put in up there. We’ll see if this section can be tarped and check out the condition of the flashing at the top. We were up there inspecting another leak spot from a different roof a few weeks ago. I don’t remember the top of the wall looking bad, but the more we can definitively narrow down the leak source the better.

Thanks for the feedback.