I am a Home Inspector, and just inspected a 100 year old home that had an asbestos shingle roof covering on it. I don’t know if it’s the original roof or not, but it appeared in satisfactory condition with the exception of an extremely heavy covering of moss. I’m well aware of the deterioration moss causes an asphalt shingle roof but do not know if it has the same harmful effect to as asbestos covering being that I’m assuming it’s makeup includes cement. I don’t know what to advise to the home buyer with regard to how it should be cleaned being that it cannot be walked upon. I’d appreciate any advice that anyone can provide.
Thanks! 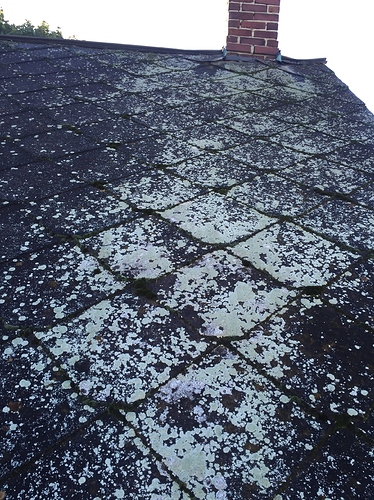 A mixture of water & TriSodiumPhosphate (TSP) should clean that with light brushing/scrubbing.

Since there are no granules to blow off a power washer would probably be ok if used lightly.

As far as getting around on the roof they will probably need to used chicken ladders, ladders that hang from the peak by a hook.

Axiom,
I appreciate your response. A couple questions I still have are, does moss have the same damaging effect on an asbestos roof covering as it does the much more common asphalt shingle? I would think not because it’s more dense with cement in its makeup, although I really have no idea. Or should I use the same caution as I do with asphalt shingle, warning them to keep the roof clear because moss retains moisture against the shingle and can result in premature deterioration?

Also, this moss growth is so heavy that I could see it spreading up under the shingles to eventually make its way to the decking, although I’m no roofer so that’s just a guess.

And…the repairs that need done involve securing a couple loose shingles as well as repairing some damage to the shingles and the flashing around the masonry chimney. Do you think the cost to the homeowner is going to be higher just because this is asbestos, or is this type of material common to those who work in this trade?
Thanks,
Bob

That’s lichen, not moss. And yes it will be expensive if your guy cares about the asbestos laws. The chimney flashing needs work too.

Yes the roof is garbage, your report should say so. And I too noticed the chimney flashing needs to be replace, good job Roofeman.
BobH, keep your standards high. You are the inspector. If the roof is properly abated, then yes the cost will be high. It is what it is. Don’t sugar coat it.

That roofs anything but garbage. With some expensive maintenance it could go another 20+.

Are we looking at the same picture?

Roofer Tip: If you don’t hold yourself to high standards no one else will.

The flashing is certainly in the report…and the side you see is the good side…the other side that you don’t see in the photo is much worse, and the damage extends to the shingles at the base of the chimney. I just don’t have a lot of experience with asbestos shingle roof coverings and what is involved with maintaining them, as well as the expense to the homeowner when repairs become necessary. With the exception of the chimney flashing and the growth of what I’m now told is Lichen, why do you label the roof as “garbage?” All the shingles are in place…there is no other damage. I cannot call something garbage, deficient or recommend the need of replacement if it is not, or simply because it
is a material that is obsolete or expensive to have repaired. I can impress upon the buyer the expense as well as regulations involved when having to deal with asbestos material, but that’s what I’m limited to. All I can do is refer them to a qualified roofing contractor for further evaluation and repair.
Thanks for your response…it’s very muich appreciated.,
Bob

I have the flashing in the report. You’re actually looking at the good side…the flashing on the other side is much worse with the deterioration extending to several of the shingles. I could see the sky from the attic space.

I appreciate the correction on the growth, although I think there is both going on now that I understand the difference between moss and lichen. I will certainly inform the buyer of the additional expense and regulations involved with an asbestos roof. Thanks for your advice.
Bob

I cannot report the roof as “garbage” because besides the flashing repairs that need taken care of and a couple shingles that need replaced, all the shingles are in place and not in bad shape at all. Of course, the moss or lichen growth needs addressed as well. Additionally, this is a half house that shares a common roof with the other half. I am limited to recommending the repairs that need made and to referring the buyer to a qualified roofing contractor for further evaluation and repair. I can of course let them know of the added expense and regulations involved when dealing with asbestos material.
Thanks for your help.
Bob

While this roof is anything but pretty it still has potential to be a great roof. Asbestos (like slate) roofs can last 100+ years when properly maintained. I agree with patchap 100%. I would be willing to bet I could spend a day or 2 replacing the flashings, missing shingles and clean off the moss this roof would easily outlast any brand new asphalt shingle roof.

Yes I would strongly recommend removing the moss, I would be worried as it is growing under the shingles and causing them to crack. Also I respect this inspector for asking questions and wanting to become more knowledgeable rather than just having a “I’m an inspector so I know everything attitude”.

BobH, if you want to learn about old school roofs (slate, tile, asbestos, copper, ect) I recommend you pick up the book “the slate roof bible”. Its the best source of information on the subject around.

Islandroofing Sir,
I appreciate your response. I delayed sending my report until I visited this site and heard from all of you who work this trade because I certainly don.t know everything about everything. I’m well versed with asphalt shingle roofing because that’s what I see on 95% of the home I inspect. I’ve learned a lot about slate over the years because I see them more often, but asbestos I’ve seen only twice now in almost 1,100 inspections. This site has been very helpful because folks like you took the time to share your expertise…even if opinions differed a bit. One thing I came away with is that no matter what, repairs on a roof covering such as this, whether they are minor or more involved, will most likely be significantly more expensive, which is the biggest consideration young home buyers have. My final report was that the roof is still overall in satisfactory condition with the exception of a couple loose shingles that will need secured and the deteriorated flashing and shingles at the base of the chimney that will need replaced. Of course I advised removal of the moss/lichen as well, and advised her to consult with a roofing contractor qualified in asbestos …and also cautioned that while definitely repairable, expect the cost to be higher than the same repairs would have been on a more common asphalt shingle. I also cautioned that there are most likely local and/or state guidelines that govern the handling of asbestos. That’s the good thing about being an inspector…I don’t have to be an expert in every facet of the home…just have to know enough to recognize and offer some advice on a problem and then refer to the qualified contractor. My expertise is HVAC and plumbing, but thanks to this site and those of you who took the time to respond, I became a lot more knowledgeable with something I knew little about. Much appreciated!
BobH

I don’t know of any roofers past or present that repairs asbestos.

Well axiom, you just met one.

Last time I tore off an asbestos roof I saved many of the shingles and I am glad I did as they made me a lot of $ over the years and saved many otherwise perfectly fine roofs. I work on them using the slate ripper to remove them and stainless steel slate hooks to secure the replacement shingles. Since repairing them I have never encountered these roofs needing additional maintenance or needing to be replaced.

But yes, the homeowner will have a hard time finding someone willing to repair their roof. At least 95% of roofers won’t be willing (or know how) to do proper repairs and just tell then to replace it with asphalt shingles. Best bet is to find a company who specializing in slate. 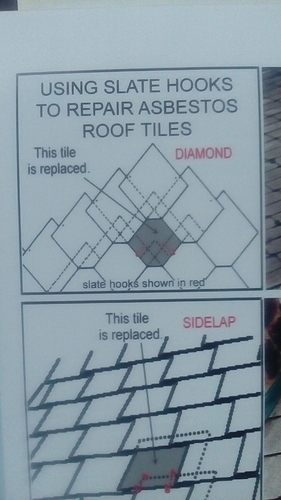 This is how I replace a diamond asbestos shingle.

Make that two, same method as IslandRoofing. But to be honest, not since they changed the asbestos laws.

Put in your report to have the homeowner, or buyer, have their insurance company come out and see if the roof is insurable. In my opinion as an insurance adjuster, it is not insurable in its current condition. Consequently, the roof needs to be replaced.

And moss & algae growth on asbestos is not a big problem from a performance standpoint.