Do to previous leaks from rusting nails, I insisted on hot dip for shingle attachment, written in contract. Roofer supervisor apparently wait to day of shingling to go buy nails but didn’t get right ones. Calls me at 10 to say he is doing roof with electroplated, I ask him to go get correct ones, he refuses, has to get roof done today, last work day of the year before Christmas. So I see it as breach of contract and am trying to negotiate a discount. They insist nails will be fine . I show them pictures showing nails directly below where 2 shingles butt, they will get wet every rain, a clear violation of Owens Corning install rules in my opinion. And the main reason I wanted hot dip, previously I had a nail in same spot rust thru and leak in 7years. I understand replacing entire roof is asking too much, but I think I need several thousand $ discount to cover future roof repairs. Do I have a strong legal case? Any reason a judge would not agree I need 3 or 4k to protect my 14k roof. found many instances of this problem, roofer is only offering 2k discount. any advise welcome. 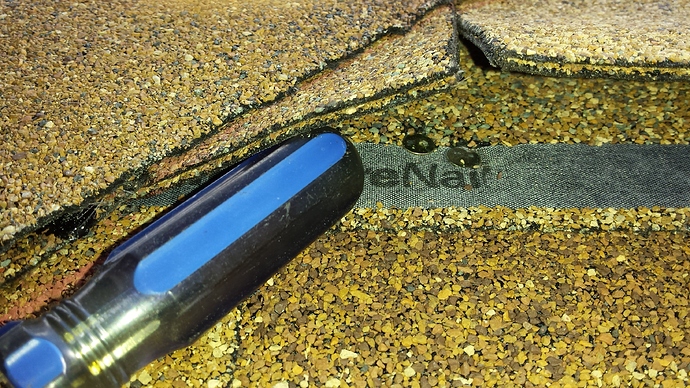 You are correct. Electro galvanized will eventually rust the head off and the shank if exposed to a butt joint. It traps moisture on the nail longer, not allowing evaporation. It will rust faster than an exposed nail. Electro galvanized is pretty much the standard nail, but you specifically asked for a hot dipped. It’s going to be up to you to push for what you paid for. I looked at an OC duration with the sure strip nail tray today. I found several rusted nails in the nail tray . Your shingle is a very good call for hot dipped. You have to figure how important it is to you. Maybe ask for a lifetime labor warranty, in writing. Include a reduction in payment. We all have had to make compensations for issues that arise. I cant get over the fact they noticed the problem in the morning and decided not to finish the roof with the correct fastener. They are negligent for not using the correct nail. They are grossly negligent for knowing it and refusing to correct it.

I agree that proper nails should have been used but the “trying to negotiate a discount” troubles me. Was your project vulnerable to the weather and you were strong armed to just move forward? If not I would have not allowed contractor on the property to put a roof on that wasn’t acceptable to you. Not knowing all the details makes it difficult to judge but replacement of improper nails down the road is not a repairable item. If you weren’t facing disaster from a storm you should have just pulled the plug and requested your contract terms be met or fired the contractor.

thanks for input, I reminded the supervisor on site daily about nails as roof was being stripped, he assured me no issue. as soon as supervisor on site called to say he was using wrong nail, I called office and salesman, nobody would stop this guy from going forward, not much I could from the office.
I wasn’t facing a disaster other than an unfinished roof for 2 weeks till after new years. I told him not to do it with wrong nails, he wouldn’t listen, I guess I should have said they were fired, if that would have even stopped him, wasn’t thinking clearly due to exasperation.

That is a tough spot for a homeowner to be in for sure. I hope everything works out for you and they don’t gain any referrals from your job.

will keep you updated, the on site supervisor’s boss has been BS me from beginning, at first saying hot dipped was only for PT wood, then today he told me there was nothing wrong with the nails in the picture, I said I wanted to speak to his boss next. that attitude alone makes me want to dig my heals in and not compromise so easily.

If they didn’t meet the terms of your contract and came up with excuses afterward I would also be digging in my heels. Those things should be discussed as options, meaning you have a choice, not rammed down your throat with the threat of not having a roof in place.
Good luck.

Make them reinstall the roof using the correct fasteners.

You specifically requested the correct nail, it’s in the contract, they knowingly refused to honor the contract.

On every wrapper from every manufacturer I have read it says to use non-corrosive nails, electro-galvanized nails are not non-corrosive.

IMO you should insist on nothing short of honoring the contract, you will win in court.

Nails must be 4" from butt joints. That is a much bigger issue than the eg nails

I agree with patchap. Had they placed the nails correctly I’d say its a non issue.l sounds like a case of a salesman (with a fancy title of supervisor) not understanding what you requested. Then sent the wrong nails to the job. Then the subcontractor couldn’t afford to sit around and wait for the proper nails on the peanuts he is being paid.

I don’t think you are in a place to ask for a discount. You can ask them to replace the roof per the contract spec with the correct nails, if they counter by Offering a discount accepting it is up to you.

I would fully inspect the roof to make sure that is the only nail on a joint. That will leak eventually regardless of the nail used.

Im afraid your suspicions are correct.
I think your 4k discount is reasonable.
Especially if they used synthetic underlayment
And/or it is a lower slope.

This shingle (Duration) traps water naturally by design
Because the “sure nail” strip sits lower than the rest of the shingle making the water drain to it between the side seams.
So water sits in its trough rusting out the fastener.
2. Only the bottom half of the sure nail strip is double thickness.
Nails driven at the top of the sure nail strip only hits a single layer thickness further making the trough deeper.

And then nails driven with a side seam right above it…
Ughhh
It bothers me the owner will not take responsibility for not installing the nails agreed on AND the even more important nail placement.
Did all the roofers on the roof not know to keep nails away from seams?
I remember being ignorant about that too when i was a newbie.
I really hope that was just a mistake and not a pattern over the whole roof.
This is a bad shingle to be making that mistake on.

Nails in butt joints are unacceptable, no matter which nails are used. The nails are not there to keep water out. They’re there to keep the shingles on, if placed properly…As an observer id defer to MPA or AX (some others have great knowledge as well) for the best course of remediation in your situation

I found more nails under butt joints, so far seems to only occur where roof hip occurs. I consulted with lawyer who says i have strong case if it comes to that, I meet with roofer next week. I have additional concerns on roof where my pool solar panels will be mounted, i think the panels and pipe acts like water damn and upstream nails will be flooded during heavy rains. Not important at this point, but should have opted for stainless nails from the start.
Owens Corning warranty document dated Jan 2019 has rusting nails as exclusion, that says they know, to me anyway. I have little confidence the roof can go past 10 years without issues. new roof is really only way for peace of mind, i think 20 years leak free with new roof. whole roof is peel and stick.

If they used the wrong nails and have nails under butt joints in multiple locations the roof likely needs to be redone. Fyi once solar panels are installed on the roof, your workmanship warranty with the roofer on that section, is pretty null and void that roof then becomes the responsibility of the solar installer.

I found more nails under butt joints, so far seems to only occur where roof hip occurs.
That is better news.

whole roof is peel and stick.

This is even better. It really might be your saving grace.
It doesnt negate the two issues.
But Ice and water shield is a secondary water Barrier.

As Miami roofers can attest, not all electroplate galvanized nails are created equal. In the span of three years we had virtually all generic brands lose their Product Approvals after failed testing - twice.
There was quite a panic. All these nails are made in China, Viet Nam, etc. Grip Rite, under HD contract, was the only brand that passed but were quickly unavailable within a 100 mile radius.
I wonder how the nails in question would handle testing for corrosion resistance in compliance with TAS 114 Appendix E, Section 2 (ASTM G 85), in acidified sea salt spray for 1000 hrs.

I’ve seen many roofs torn off from the Andrew days ('92) and the electroplate nails look new. Bad nails will start showing rust on the heads before Final Payment, LOL.

well this issue is closed, I was stressing over going to court, so I took a 2500 discount and are headed to roof to find all the nails under butts and coat them.
thank for help

What are you coating them with?

neoprene flashing . I also decided to yearly check under full shingle and see if cloth is wicking water to nails and rusting them. I added thing sheet of think aluminum under shingle so it doesn’t get tar’d down, that might help or hurt the nails rusting differently than a tar’d down shingle, but give it a shot.