How to actually get a straight answer about my roof? Can anyone here help?

So I bought a home with a reno loan. Roof didn’t leak but was pretty beat up looking, so I paid my GC (who advertised as a GAF master roofer, etc, etc) For a new roof with a 30yr shingle, 20yr flat and 12 yr labor warranty. Company turned out to be crooked… long story, but basically two guys in business together. One gets the license and arranges a ton of fake reviews/testimonials, the other rips off as many people as he can, takes the fall and does 1-2 yrs, gets out, and they repeat the scam.
Now, they did appear to have put a roof on, and that was all well and good (I thought)… they just stole $30k for other work that they didn’t do before the guy got put in prison for ripping others off simultaneously, and his partner disconnected the companies phones and took all the money they stole back to his mansion (in the words of one of their employees who told me they stiffed him on his last weeks pay). Cops showed no interest in charging him with anything even though he got all the licenses, lied about certs, signed documents attesting that he nor his agents had any judgements against them (they have 20 yrs of running this scam with judgements every 3-4 (within a yr of his partner getting out of prison)), and I don’t have the money to risk hiring a lawyer to go after this guy who is probably quite experienced at hiding assets… so I just paid to get everything done and all was going as well as one could expect… until I tried too free up the $6k in escrow my lender hadn’t paid them yet… they wanted receipts for the new roof. They agreed to an inspection, and I paid another roofer $250 for one. They stalled for four months after they had supposedly inspected the roof, then sent me an invoice saying “front roof bad, rear roof worse, need new roof” and charged my card. I asked them for an estimate to do the work and they stopped responding.
I had several roofers look at the roof last summer when getting quotes to repair the gutters the original contractors had roofed over in the front, and all had said the roof looked good… so I got a second opinion. This roofer said that the front roof was fine, had no idea why the other roofer wanted to replace it, but said that the flat roof in back was using an adhesive-backed Gaf modified bitumen product that shouldn’t be used for home roofs, and I needed torch down… but he didn’t do torch down, so he recommended a third roofer. Third roofer missed 3 appointments to even look at the roof and stopped responding. Meanwhile I contacted GAF and was told that the stuff that was used on my roof was fine for that application.

Now I’m no roofer, and there’s some iffy looking tar application and patch-work looking bits near the downspout and chimney area of the roof, as well as some bad looking parts at the “gutter”, but that’s a couple feet out in an overhang that I doubt is a leak risk (it’d leak onto the ground)… but otherwise it doesn’t look like a roof that’s ready to blow off or fall apart to me, and we’re at a year now with no leaks… so I don’t know who to believe or trust, and I flat out can’t even find a roofer who’ll do a torch down on my roof because it’s a row-home without “fire shields” between the houses. I just want to be able to satisfy my lender so I can get the home appraised and stop paying interest on $6k in a useless escrow after losing $30k to a crook and spending another $20k in savings to finish what he didn’t do… but honestly I’ve tried from three different roofers to get an estimate… any estimate… for ANYTHING. And they just disappear.

I DID manage to get a few pictures of the roof from two of the inspections… both seemed confused where my roof ended and sent me a TON of pictures of my neighbors chimney and the areas my roof met/overlapped his… but maybe that’s important to my roof? I don’t know. Still, there’s a few pictures of my roof as well… so I’ve uploaded them in case that can give you an idea of what I’m dealing with.

Thank you for any help or advice you can offer.

Below are pictures. The grey block chimney is mine… brick chimneys are my neighbors. Black Shingles are mine in the picture of the front roof. 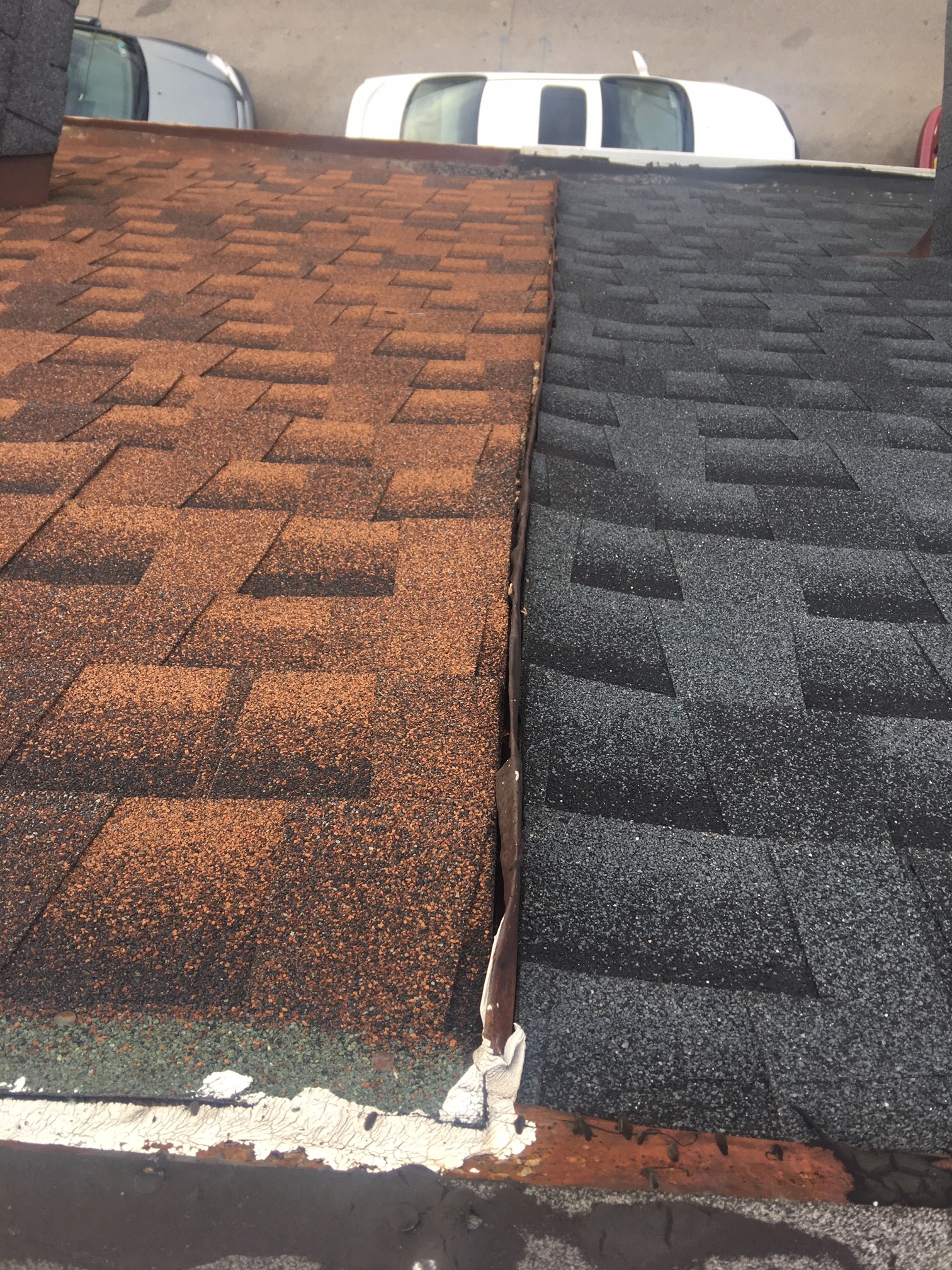 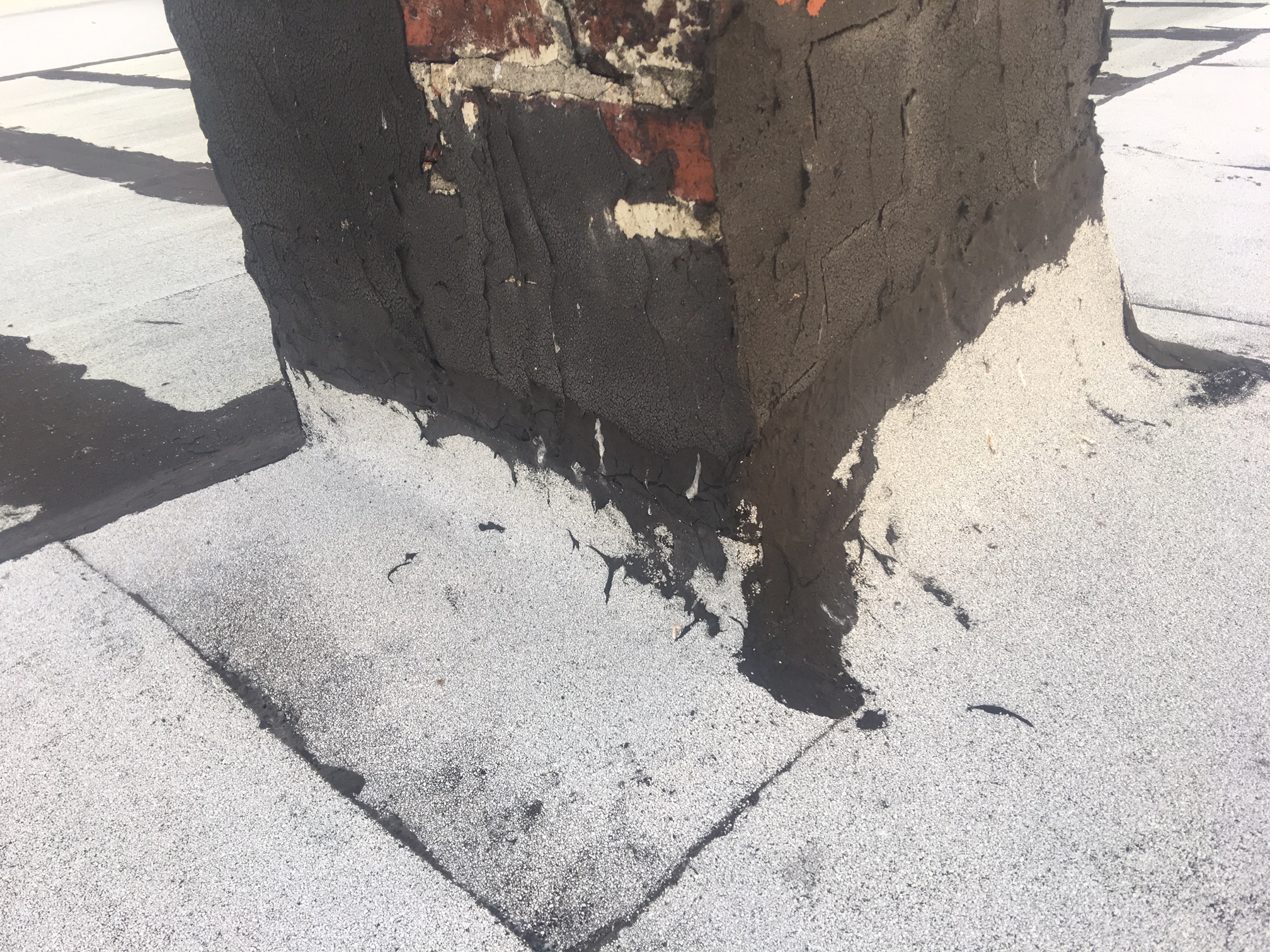 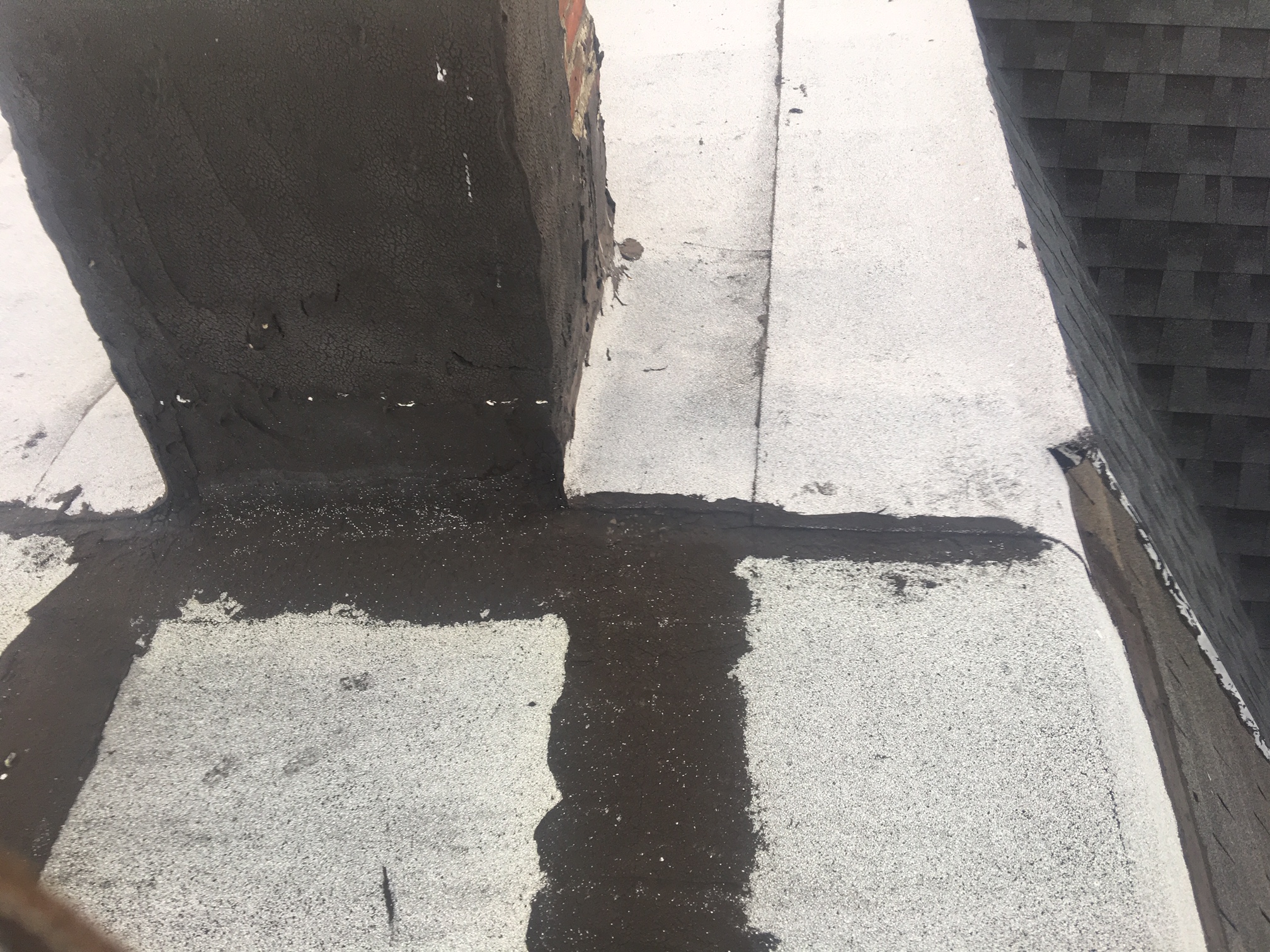 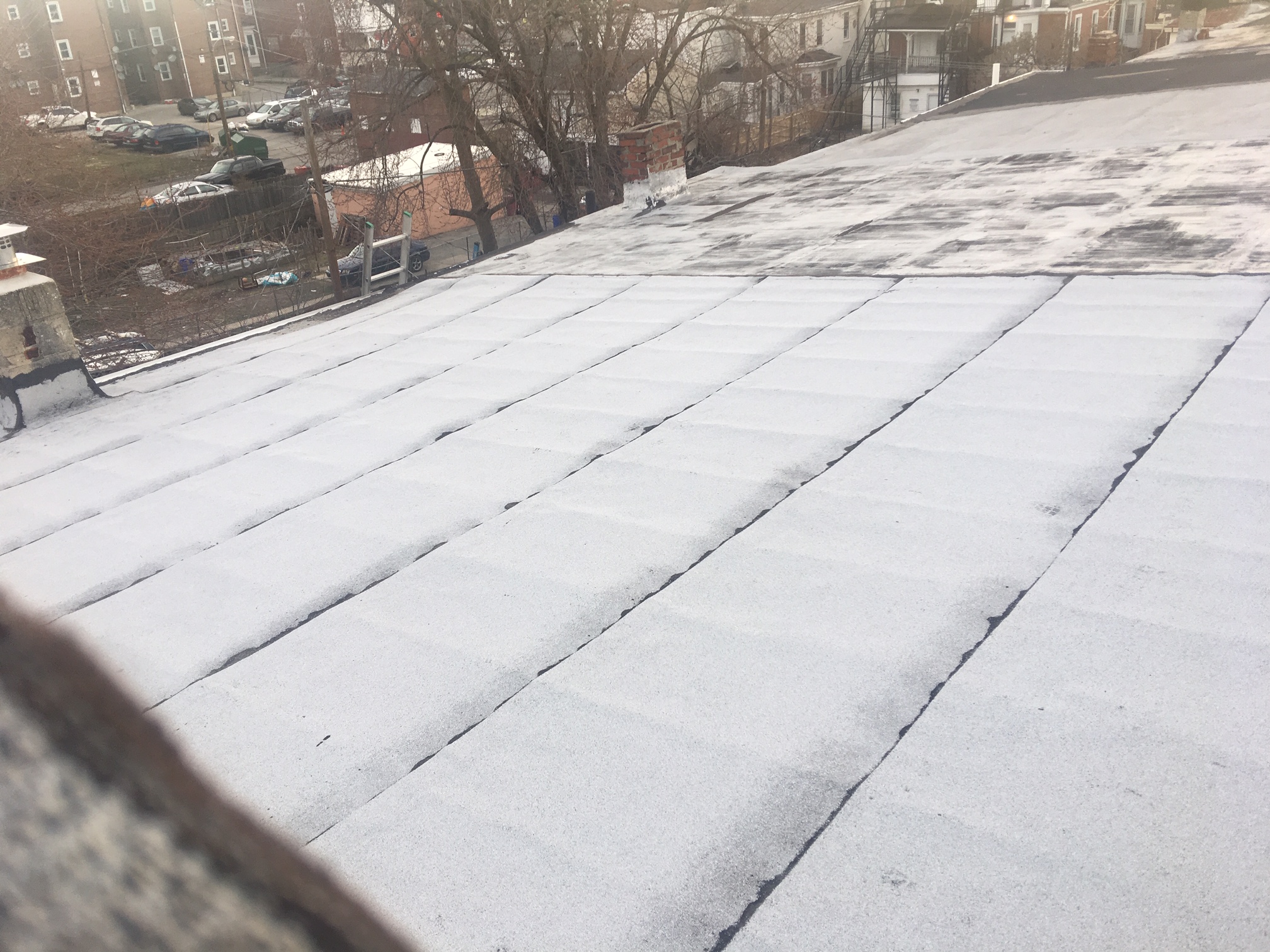 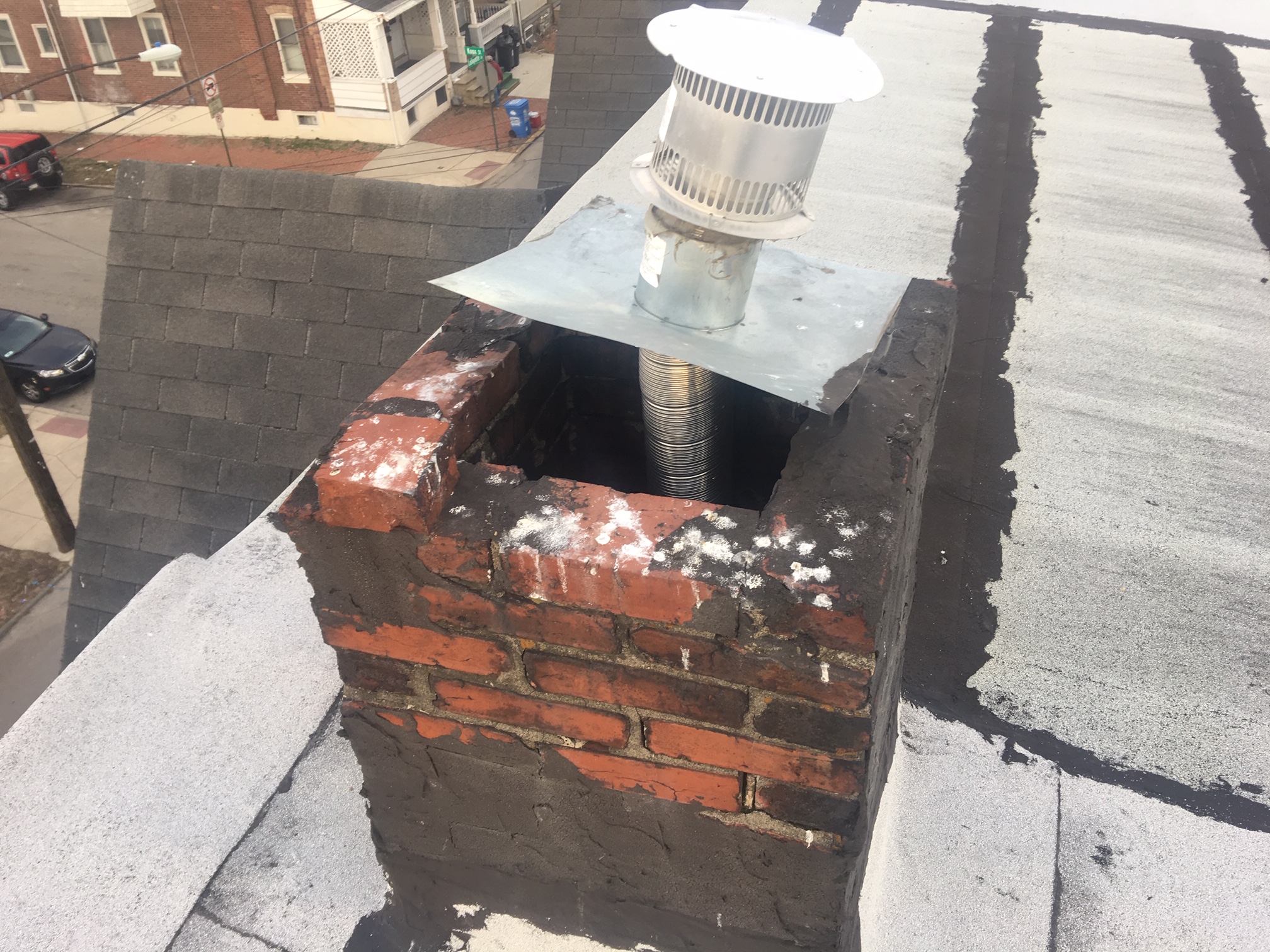 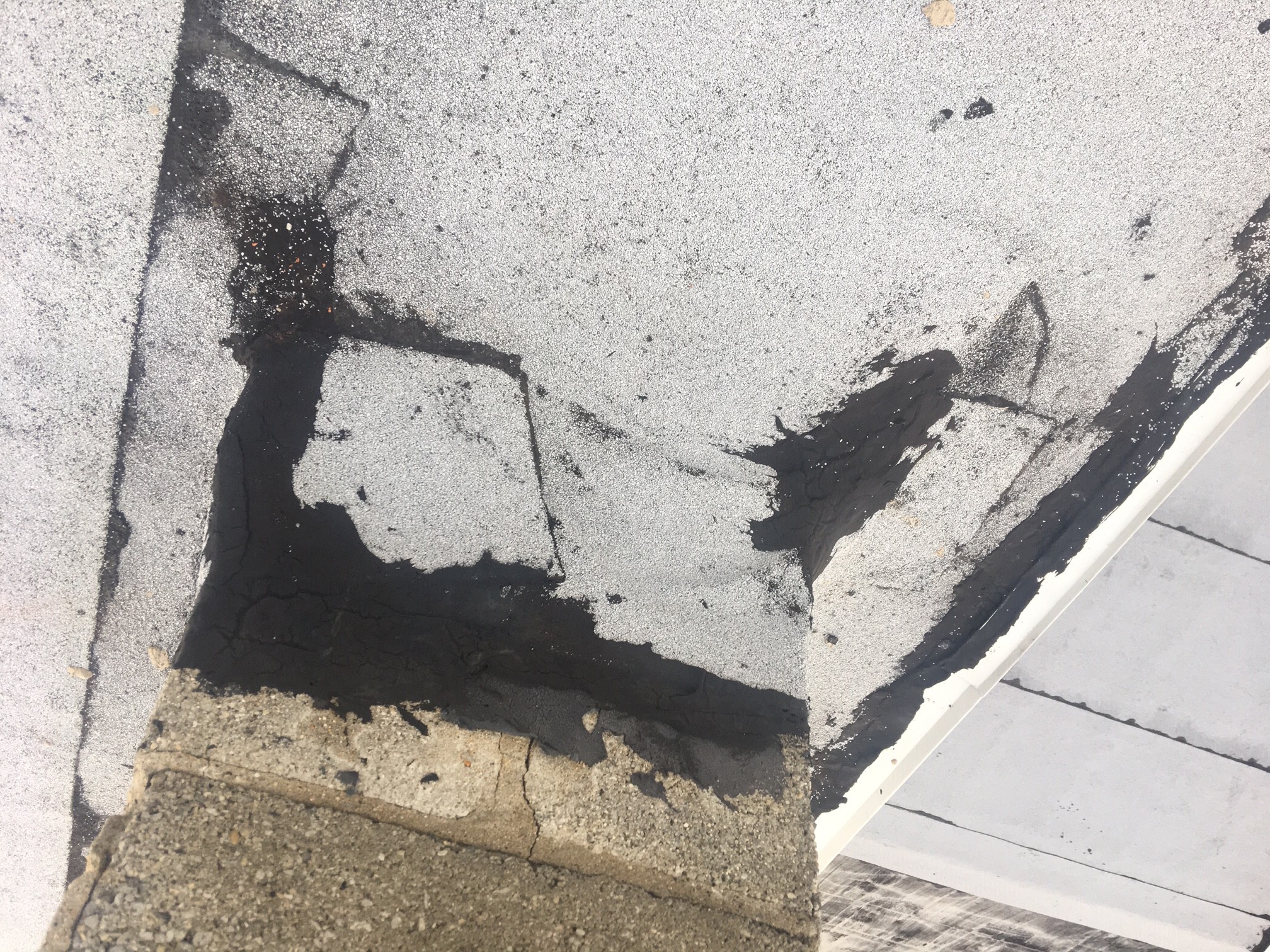 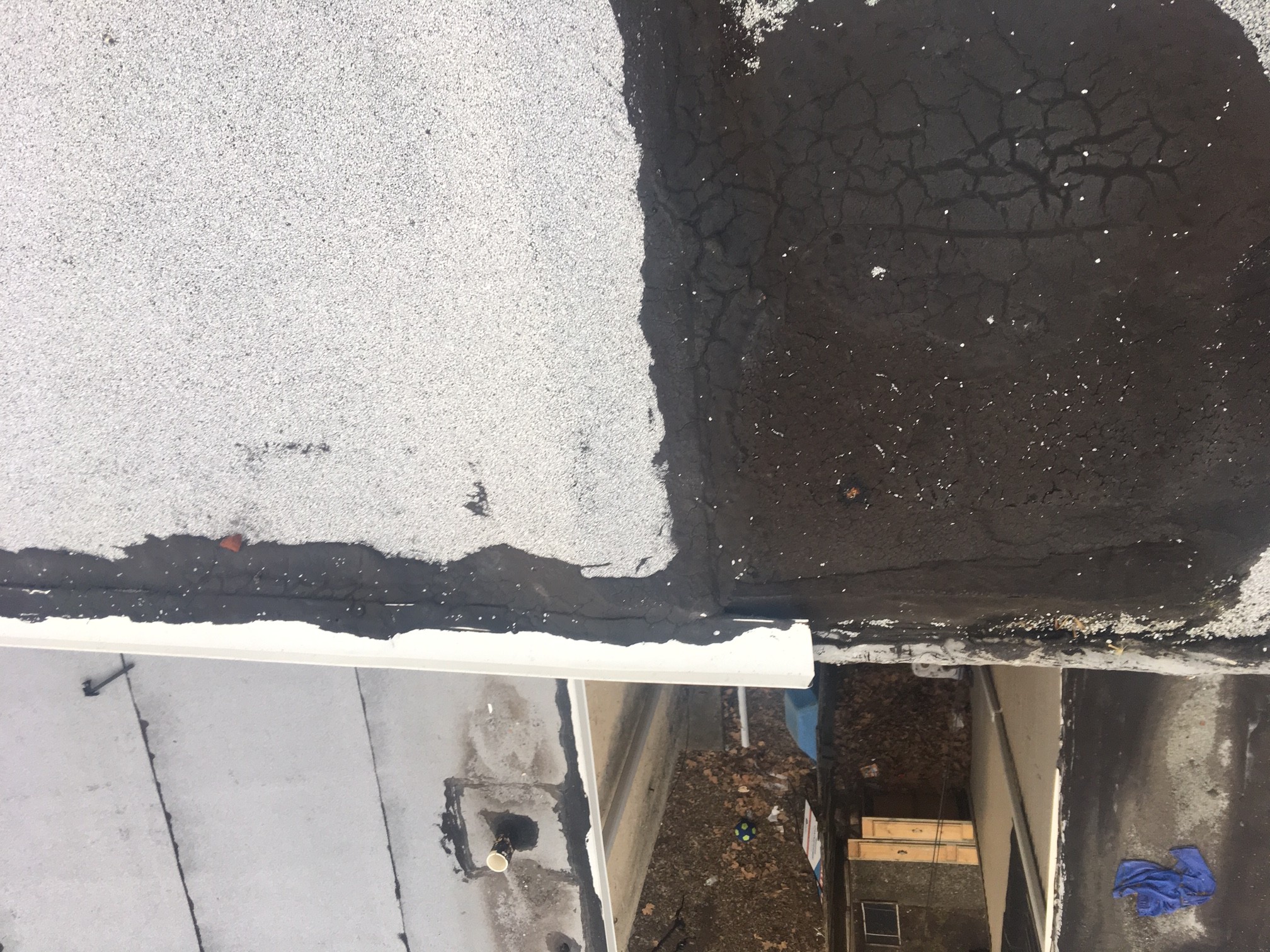 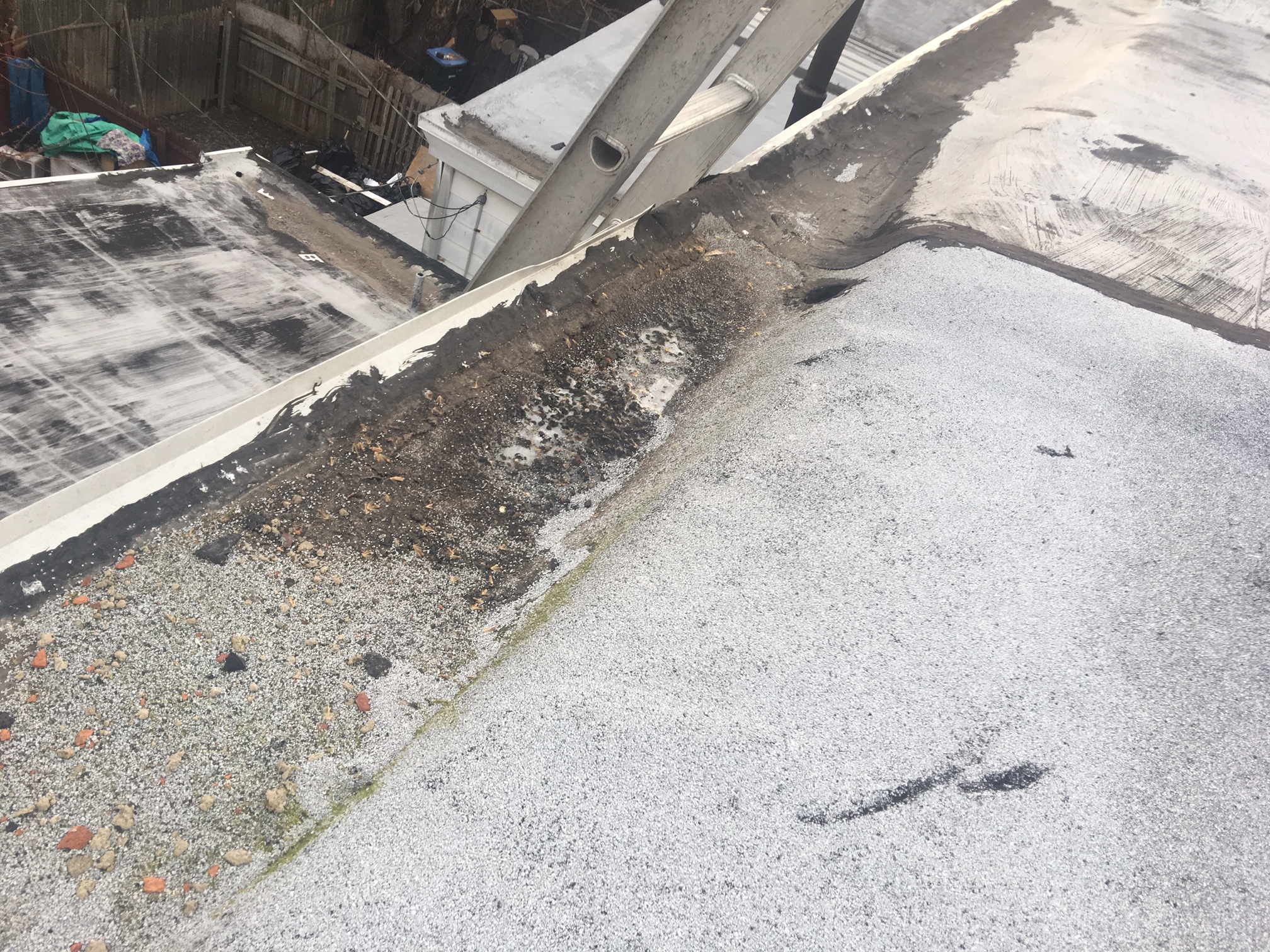 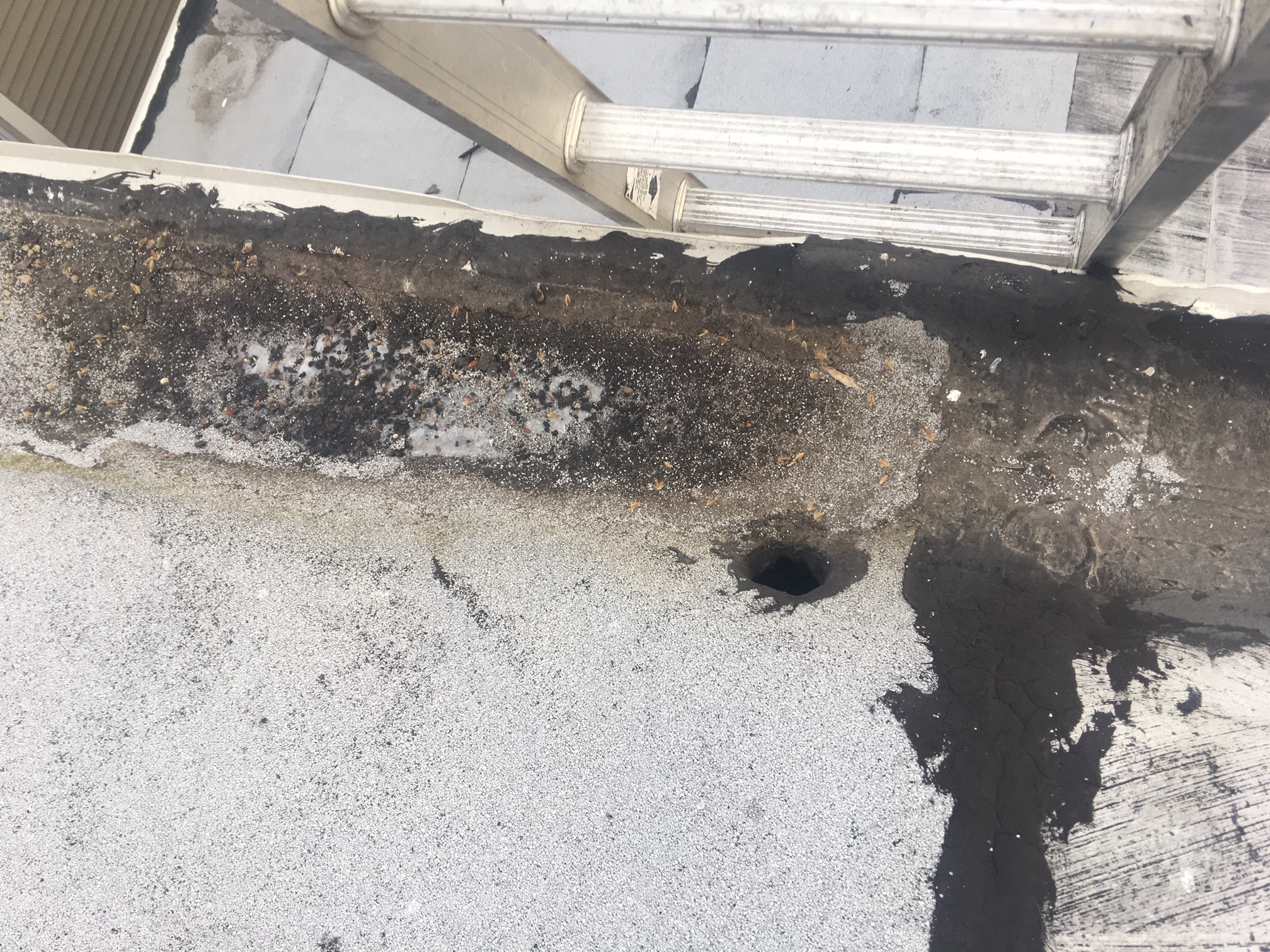 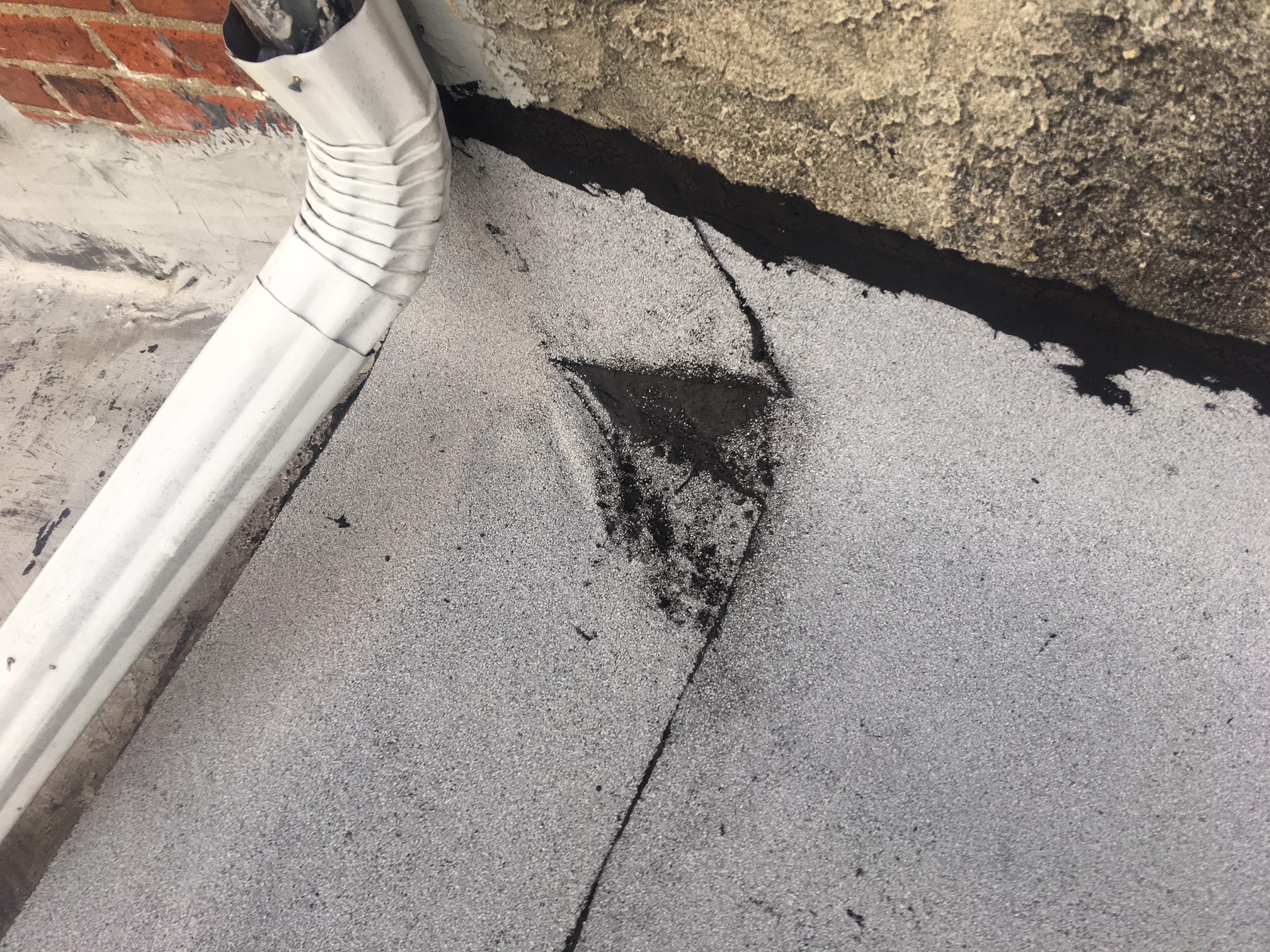 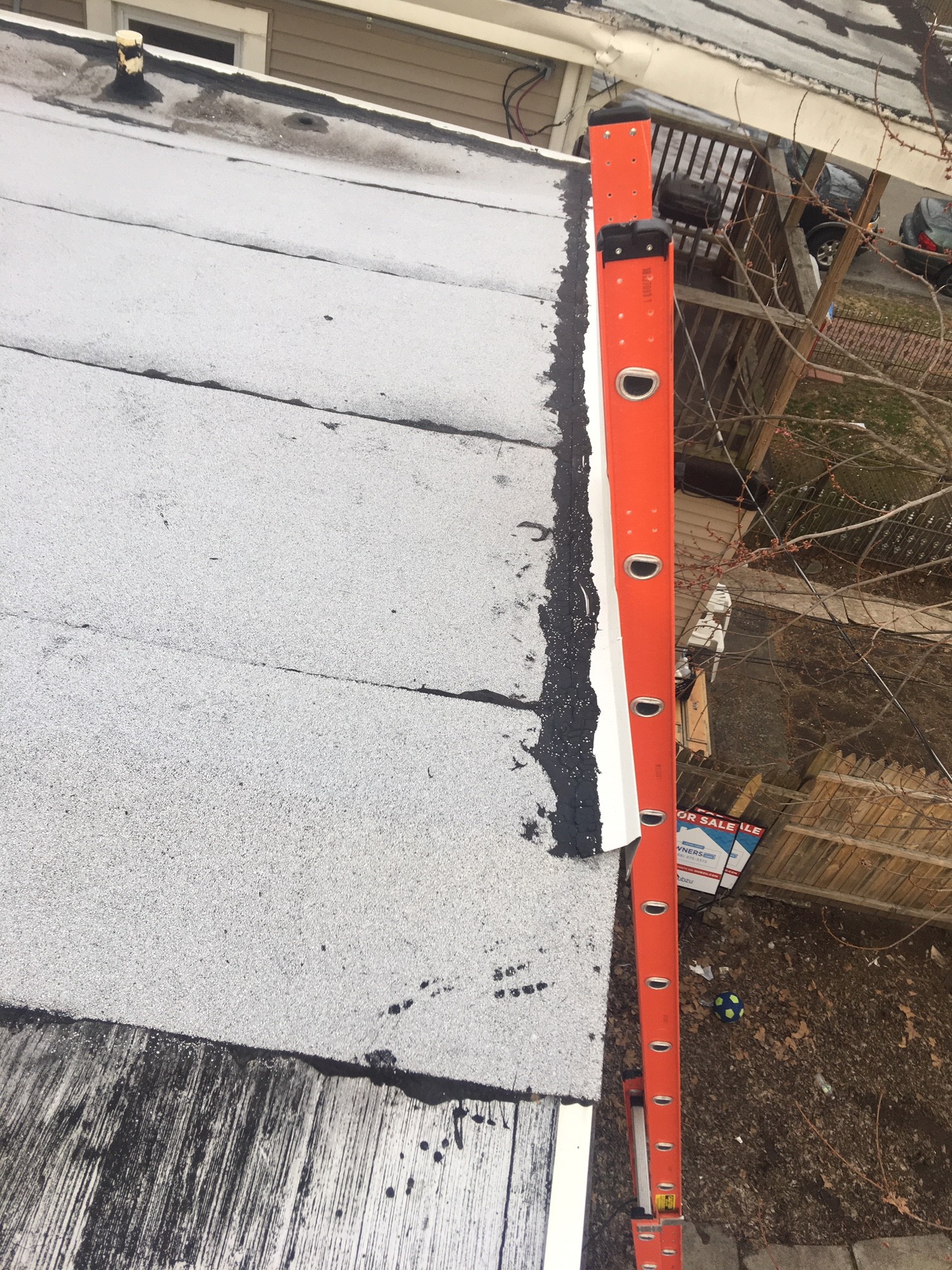 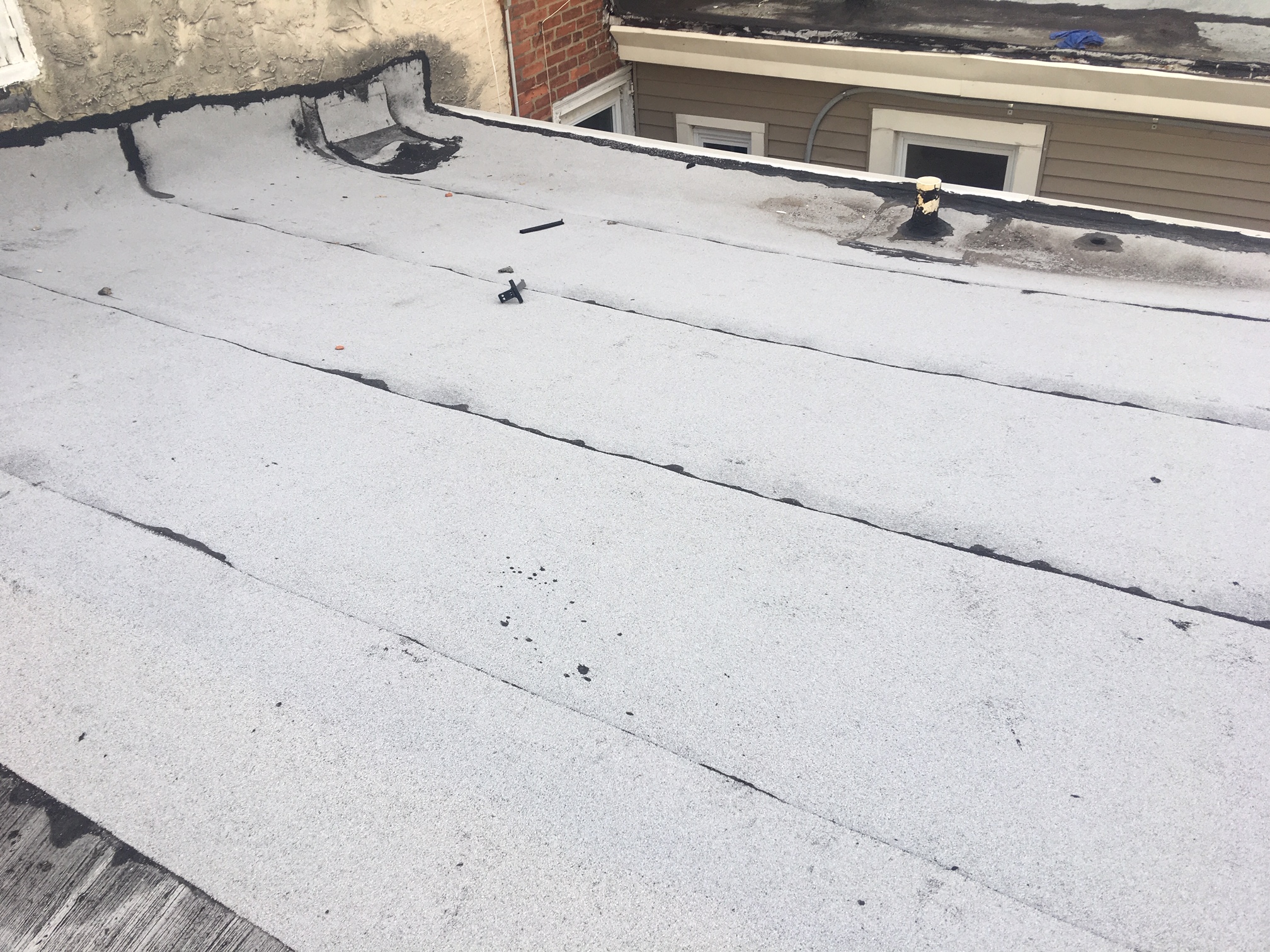 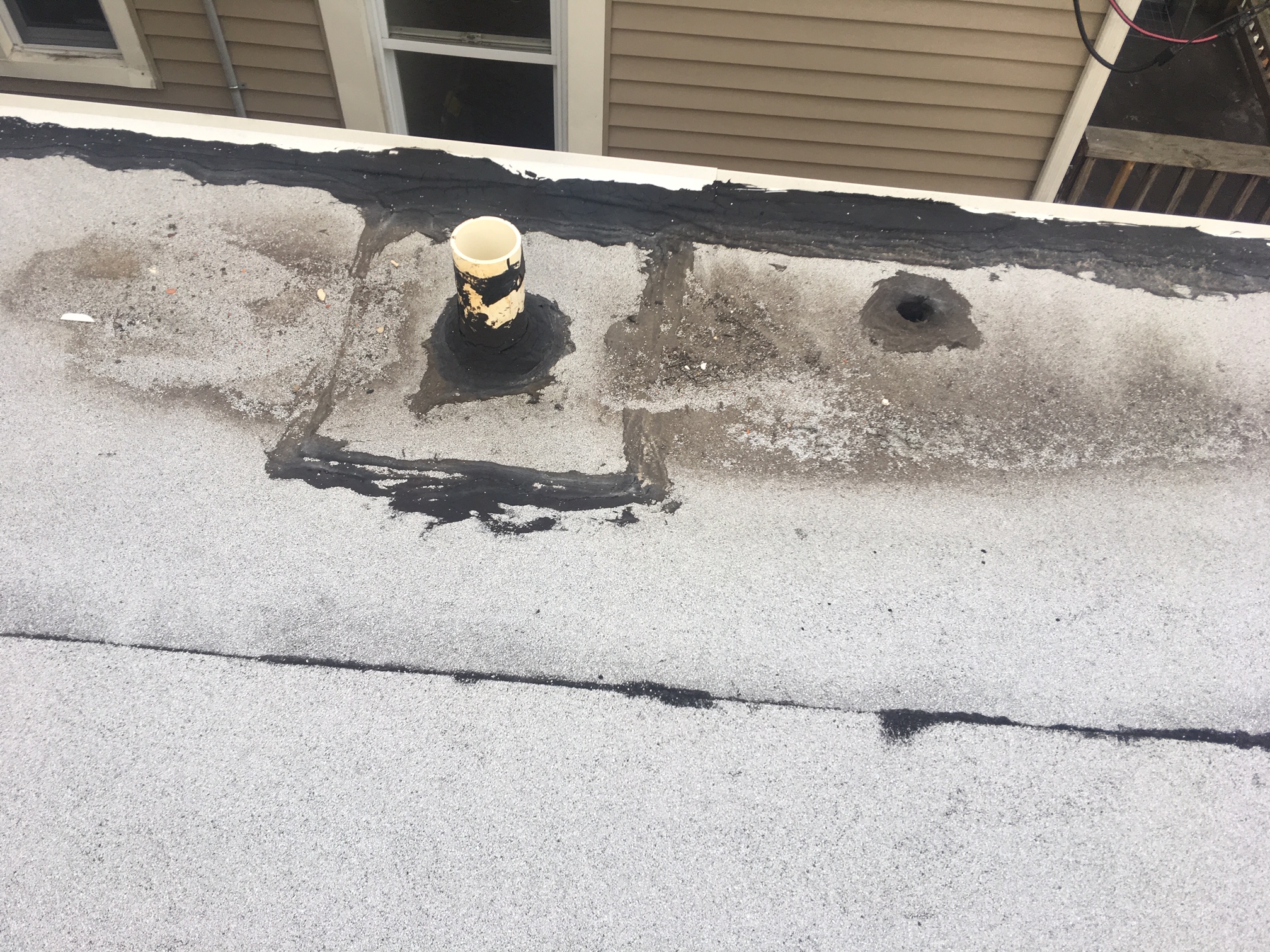 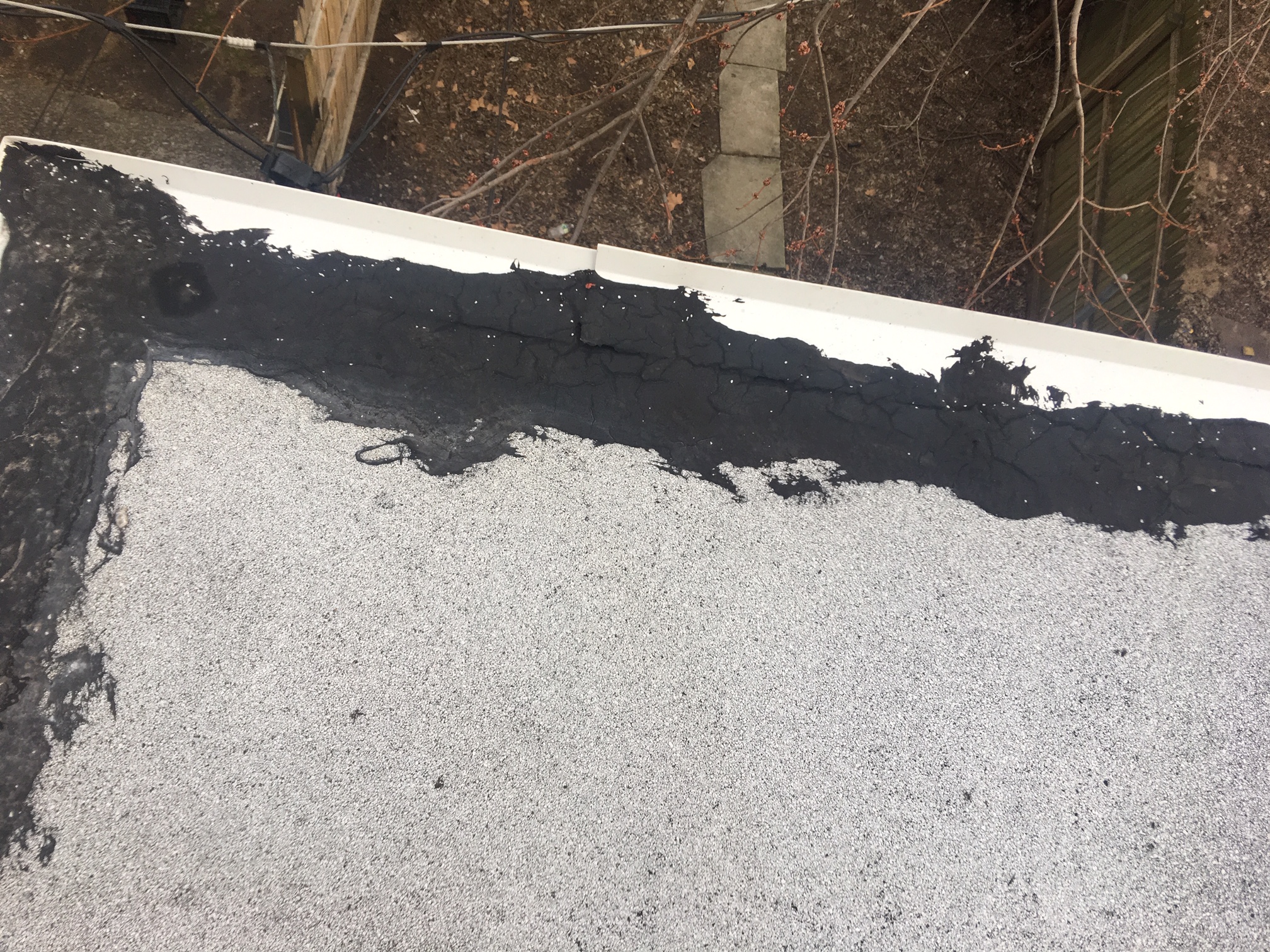 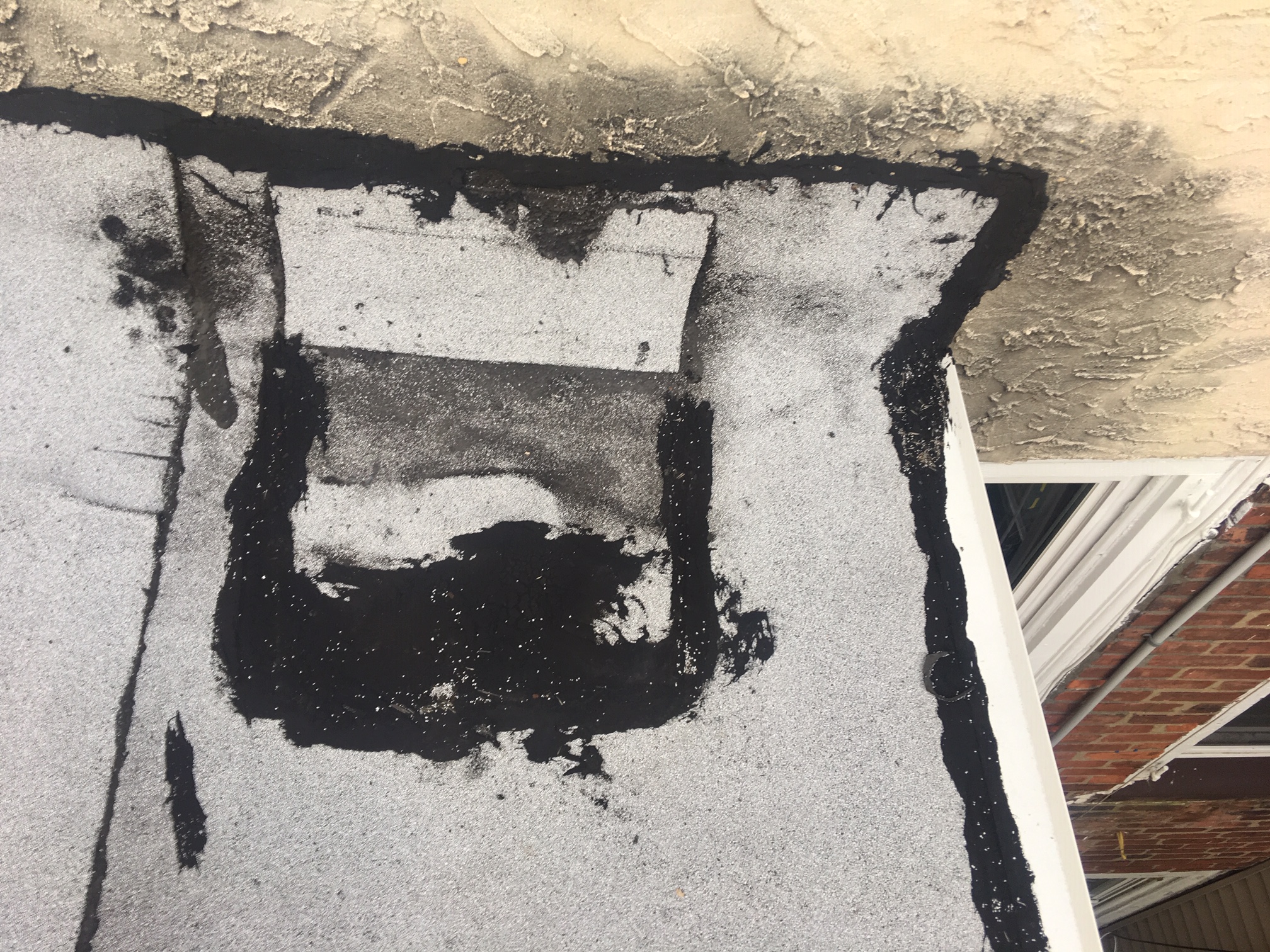 So the second roofer got back to me. Says the best option is to have him Gaco coat it for $1200.

I’m exhausted by reading the chronology and more so by the pictures of terrible workmanship. Remove everything and install single ply. Why the emphasis on torchdown? I haven’t seen that much mastic in a long time, thankfully.

Thank you for replying. Imagine how exhausted I am living that chronology.

Torch down was what the roofer said should have been used. Spoke with another roofer today and he said that they use the same stuff I’ve already got and they are looking at the work and going to give me a recommendation. As mentioned, the other roofer did eventually get back to me and gave me a quote for a gacoroof coating, which they think is the best course. I’ll have to investigate a single ply roof and see who can do that and what costs would be.

Other than the use of mastic, what is telling of the work being shoddy to you? I agree the gutters and edges look sloppy, but what is wrong with the large square area of the roof (95% of the roof, seen in image 3386)? Is there evidence that is poorly done as well? is it necessary to remove that to repair the shoddy work at the gutter and chimney area’s?

Ok other roofer got back to me and seems like he knew what he was talking about.

Roofers keep disappearing because it’s a rowhome and they don’t want to accept responsibility if a neighbors bad roof causes a leak… says the only way they do a roof like this is if they can do the whole row.

Says it looks like they roofed over an old tin roof (were supposed rip it down to beams and replace decking and everything else… not sure what fantasy world I was in where they actually did what they were paid for).

Basically said “good luck finding a roofer who will touch it”.

Speaking of which, is that a metal roof on my neighboors house (seen far side in picture 3386 and 3391)? Is it reasonable to expect that they probably just rolled the Modified Bitumen out over something like that on my roof?

Before you go forward with another roofer I would recommend this:

Ask to see proof of their General Liability insurance, something licenced contractors are required to have, and save a copy of their documentation. Call into the companies number off Google, not the document itself and ask to verify coverage for “**”. If they have that insurance and it is not in a position to expire within the next month you should be well protected even if this new roofer turns out to be incompetent.

You can contact GAF and let them know your immense displeasure with the GAF certified individuals. be sure to give them both names and the name of the company. GAF works with my company and at least in Colorado seem to be very protective of their reputation. You can get them pulled of the GAF recomended list and perminately blacklisted

You can bring them to civil court with a much lower standard of proof than criminal court. Find a lawyer in your area, shouldn’t be hard, that specializes in either Construction GL or personal fraud. Ask if they will work contingency. Most of the time that means you will not get your full amount back ( lawyer will take 40%+ of settlement) but it will hurt your scammers immensely and get you on the path to becoming financially hole again.

Lastly, we live in a digital age. Name and shame is a popular and powerful tactic.If you have photos of them, post them. If they have been arrested you can find their mug shots online. Social media with their full name and photo on a public setting will be searchable by any potential victims in the future. If you do this it is important that you use no exaggerations, flowery language or anything that could be perceived as ‘untrue’. Be as factual and blunt as possible.

We don’t have rows around here but some general information.

Self Adhered Modified is the same thing as torch down, just applied differently.

The edges, drains, pipes, are all flashed incorrectly. Doing asphalt roofing right is becoming a dying art. However it should be correctable.

To get your roof fixed at a reasonable price you should be able to find someone. Hate to say it but your best bet would be an experienced roofer doing it on the side. The companies with people who could do this right will give you the same answer about only wanting to do the whole row.

Contact a reputable commercial roof company. Your best bet to find the good ones would be to go to your local roof supplier and ask them. Contact them and see if they would have a look, if they can’t help ask if they have anyone who would do it on the side. You can also ask your local school business manager or head of maintenance who they would recommend.

Self adhered modifed is no where near as good as APP modifeid not even close.

Self adhered modified is a dumbed down user friendly DIY product, APP modifed requires a bit more knowledge & skill to properly apply without burning the structure down to boot.

APP is a different product. Self adhered modified is SBS, and the sheet is the same as a torch or mop SBS product, just adhered differently. Torch or hot asphalt is a superior installation method, but that doesn’t change the sheet.