How to apply asphalt shingles as siding

In summary: How do you apply shingles to a nearly vertical deck/wall?

First, thanks for previous help here. Last project came out great - thanks in large part to this board. The seniour members of the board certainly did show me that my limited experience of 10 to 20 roofs is less than theirs.

Second, just bought a new house. Well, 39 years old, actually. Has what we call here in Northern Virginia a “Dutch Colonial” model. You might call it a Gambrel roof. Meaning that it has shingles both on the top of the house in a 5/12 section near the ridge, and also shingles against a nearly vertical wall, pitch in excess of 100/12.

To my good fortune, the shingles are not bent over the transition. Instead, the upper deck ends with drip edge at its base, and the lower “deck” has a 1x6 board, you could call a fascia board, at the top if its run.

Here is my question: How do you apply shingles to a nearly vertical deck/wall? Is the starter course typical? Are six nails required, as GAF advises? How do I terminate the run at the top of the wall, under the edge of the 1x6? Do I need ice and water shield or other flashing of some sort near the top?

Your sharing the benefit of your long experience is appreciated.

I did a gambrel roof once before, we did it pretty much just like a regular roof. Drip edge on the bottom to kick water away from the house, starters on the bottom just like a roof. We used paper underlay, but you could use something better of course, synthetic underlay would be sufficient, and just like wrapping a brand new house.
We used 8 nails per shingle I believe, a nail every 4" or so. We even used 3-tab caps to go up the corners where the walls meet.

It was a strange thing to shingle a wall lol, but very interesting.

Oh, your top. Can you remove that 2x6 fascia piece, shingle all the way up, and then replace that 2x6?

Yes, the folks at GAF said to pull the 1x6 trim at the top and replace it, too.

Regarding where the shingled wall meets the dormer side wall, that is a tricky location. I was thinking step flashing, as if it was any side wall you would meet. Can you explain the part about your use of 3-tab caps at that point a little more?

Well the building I did was a 4 sided gambrel structure. Same as yours, the walls terminated at the roof, and the roof overhung the wall. So at the corners of 2 walls, after we shingled it, we capped it just like capping a hip (as seen below).
Now your issue with a dormer that probably jets straight out of the wall, I never had to deal with that. But I would say step flashing. Maybe like 5"x5" step though. Not your average 3"x4" step. I know siding guys don’t use metal under their Hardy Plank in the corners. LOL, Hey maybe this, do a reverse capping method in the corner of your dormer and roof. Instead of folding caps over a ridge or hip, fold it backwards in the corner.
Just an idea to try.

I think you guys are referring to a “mansard roof”.

You are right that the roof bcdemon showed is a mansard. In my case, there are no hips. My new house is shown below. 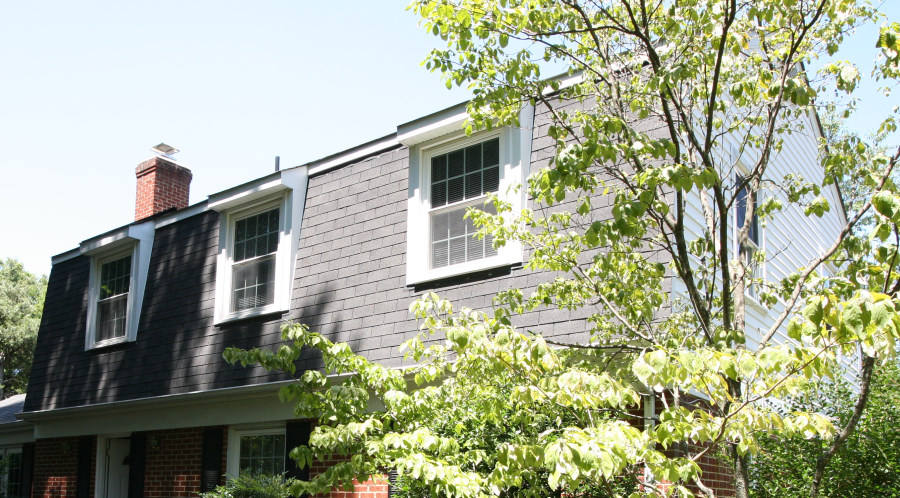 Some manufactures call for more fasteners,and rightfully so.Unlike a lower pitch roof the weight of your material is working against gravity.

I recommend the manufacture spec installation concerning fasteners.(The entire installation spec process is equally important but I am speaking of the fasteners specifically.)

One thing you want to do is make sure your fasteners are spaced properly,properly seated as well as maintaining proper fastener placement(Along the nail line)

Another thing I do to assist in the shingles staying put as one.,.,Put 4 dabs of cement every 8" on the nail line.Some do some don’t.,I have never had a shingle slip once using that technique.

The gambrels and mansards take alot of time. You have to shingle the side of a wall, so you can’t just put a bundle of shingles next to you. I know I’m late to the show, but about 10yrs ago, I took a home with the same style you are shingling and put hardie’s shingle side. The home really looked cool. The scalloped, shingle look is really neat, plus with it being fiber cement, they will only have to paint it once every 10 to 15yrs, vs. shingling it. Hope your project works out for you.
With the cost of shingles being around 80 a sq, you probably could have put 8-1/4" plank, fiber cement on it and been about the same price. Good luck with the job.

Nice post. But how can we avoid leaking problems with shingles??

Mostly good advice. I have done many a mansard, just went and re-nailed one last week cause shingles were sliding off. Messy job re-sealing all the shingles.
Nail, nail and nail. If you look around town you see shingles, particularly architects, sliding off all over the place on mansard roofs. Its cause people high nail or don’t put enough. I’m with BC-eight nails, on the line.

Yuck. I hate that style. Rip the shingles off, and put nice siding on it.

How affordable are asphalt shingles if you buy them in bulk? We are getting ready to remodel our home and install a new roof. The siding also needs to be replaced and I was trying to find out more about using asphalt shingles as siding.