Is this roof fixable? (TERRIBLE WORKMANSHIP)

Recently had a new roof installed, but I believe this work is completely unacceptable. Do you guys think that this roof can be repaired, or this workmanship so bad that I deserve a replacement roof? Does this pass inspection? Would I have a case in court if they denied me a new roof? 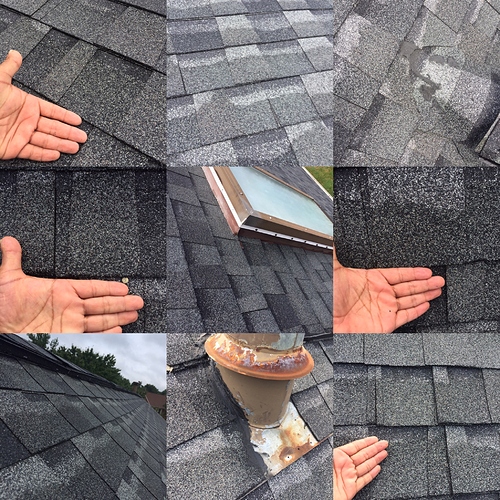 Yes, It can be fixed.

I’d get them back to:

Of course there is more opportunity for improvement, but I do not see any other issues in these pics that would imply a shortened lifespan or decreased reliability of the roof.

No you don’t have a case. There is one shingle that should have been replaced and the rest is fine. One nail out on a whole roof is not bad. It happens. What are you even pointing out in the other pictures? The 1/8 inch that the shingles are off?

You don’t have a case because you hired them to do your roof and they did it. Roofs aren’t masterpieces. It’s not a great job but it was you who hired them. Should have stopped them when the work was being done to correct those issues. And if they aren’t licensed contractors you really have no recourse. Now if they lied about being licensed that’s a different story, or if they took the money for replacing that vent stack and didnt replace it then you have a claim. Aside from that wait til next years hail storm and then call me.

Susan
How can you even say all this? The homeowner should have stopped them when the roof was being done? What if they were at work? Did you not see the joints almost lined up, rusted pipe flashing and incorrectly flashed skylight? I hate when roofers automatically go against the homeowner. When you say roofs aren’t masterpieces it tells me all I need to know.

Roofs are to be installed to a set of standards most of which are laid out in Manufacturer’s Installation Instructions and building code. So part of it it quite objective. If the materials have been installed to spec and codes have been observed, you wouldn’t have much of a case for subjective sloppy work.

If the roof doesn’t leak and cosmetically looks good from the ground, it might be best to take a chill pill. You could always hire a competent 3rd party to inspect the roof to make certain the installation specs and code requirements were taken care of. Displaying several small photos on the web site is hardly going to get your question answered unless the problems were blatant. From a code perspective alone, that HVC furnace vent should have been replaced due to being damaged/corroded.

I see few things that should be addressed. The shingle with the exposed nail, pipe collar, and caps under the shingles at the valley point. None of them justify a complete reroof.

I’m not automatically going against the homeowner but we don’t know what he paid them either. He might have gone with the lowest bidder and got what he paid for. He might not have paid to replace the vent stack. Should it have been replaced? Yes sure, but should the roofer pay for it if the homeowner didnt?
Like I said it’s not a good job but the things he is pointing out are minor cosmetic issues. The joints are 5-6 inches apart from what i can see, staggard like they should be. Except in the one valley shot where the joint is not even shown and one pic on the bottom right, which is messed up yeah but his question was does he deserve a new roof and the answer is no. The court system will not be in his favor. HE HIRED THEM. They were inexperienced and probably the cheapest. That’s the kind of sloppy work you get with inexperienced crews.

Doesn’t mean the roof is gonna come crashing down on his head. It is the homeowners responsibility to vet and research the contractors they hire. Sorry you don’t like the answer, I don’t either. It’s unfortunate that homeowners have to learn the hard way. It’s unfortunate that we as a society can’t depend on the professionals to know their profession. I’m not just giving my opinion siding w the roofer. I’m answering his question.

Fair enough Susan. I just think that we have a certain responsibility to address all the little things that come up, whether they were bid in or not. I find that sometimes the homeowner would have gladly paid extra for something to be done the right way but was ignorant of the process.

i paid around 12k for this roof by the way. paid 3k so far, still witholding 9k.

Have them fix the issues I pointed out then pay them. You don’t have a case.

The IRC states that Vents cannot be reinstalled if they are damaged or rusted. Correction courses should be hidden a few feet below the ridge, but they happen and are pretty much impossible to avoid. A few shingles are mildly overlapped and one is problem under 7" as many manufacturers don’t allow. As everyone said, you won’t get a full roof. You can have them fix it and if they are willing to work with you and fix your areas of concern you should pay them the remaining balance.

I am curious as to why you chose this contractor and weather or not they are licensed?