I am moving a shed roof attached to a shop with a metal roof and have never seen or dealt with the type of screws holding it down. They have a 7/16 plastic type head attached to the metal screw. The heads are stripping off the screw when attempting to back most out. The head jams in the socket and I am left with the metal portion still holding the metal down. It is flanged with a cross patern type head the plastic was adhered to but fits no tool that I know of and nodules break off in attemp to grab the head with vise grips. Any ideas how to get these suckers out? Appreciative of any suggestions. Thank you.

Here is a photo of a screw and what is left when the plastic head strips off. 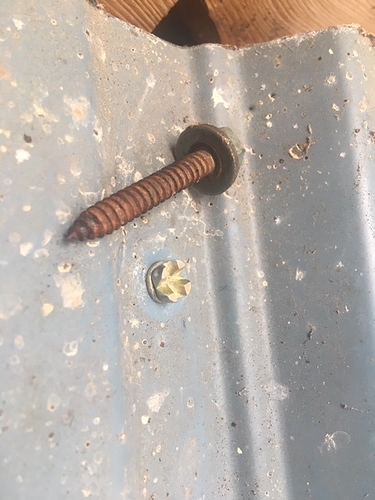 I know it sucks but will probably need to break off (or pull out) the ones that won’t unscrew with a hammer and flat bar.

Have you tried a #3 Phillips?

Wish I could break the head off or pull them out. They are a pretty big screw set in cured old fir and seized in enough that 75% of those platic heads strip off. Hard metal too. I went at the head with a regular drill bit to try and drill the head off and burred the bit. It is almost if it is designed so you have to bugger up the sheating to get it off. Maybe a carbide drill bit might bore into the head but dandg what a slow process.thanks

Thanks. Put a set of vise grips to them. Got one out then the second one of the f our nodules broke off leaving not enough of a head to grip to anymore.

The slots in the remaining head are beveled outwards so there id nothing for the philips driver to grip on.

Cut them off with an oscillating tool.

Thanks Axiom. Yes a ocilating tool or angle grinder with a cut off wheel will get em off. The plan is to re use the sheathing so am concerned with maring the metal roofing.

I did say “might”. Axiom has you steered right.

I know it’s an old thread but maybe I can help someone else. Have a barn with the same plastic head screws that are rotten and just break off. What I did was break of the head to get to the metal “tooth” (as I call it) and then use a #3 Phillips head bit with the point ground off. Grind it down to where you get a flat + sign. I was able to use a impact driver to remove almost 50 screws with one bit with no damage to the bit (you do have to press down on the bit to keep it from slipping out). I only had one that I had to use adjustable pliers to loosen first. Now, my screws were into metal not wood like the original posting but just wanted to get you something else to try. Good luck!

I think those were Butler Building screws. Had problems with the zinc head screws, too. There’s another hex under that when you strip em out.