Hi all. In a fix, looking for advice…

I recently paid a local roofing company (big name, fairly well known in the area) to replace the roof on my 1200sf house, and both covered porches.

I knew going in that there was water damage and rot in both porch roofs. We agreed (and the contract specified) that any decking repairs would be at additional cost.

Once the shingles were torn off, they informed me that I would need 30 sheets of plywood to repair the damage. It was more than I expected, but I knew it had to be done.

I agreed, they finished the job and left, leaving their dumpster in the driveway for later pickup. I couldn’t help but notice that there was no rotten wood in the dumpster. Certainly not the 1,000sf they had supposedly replaced.

So, I removed the ceiling to inspect. And sure enough, I can see my nice new plywood peaking through the rotted holes in my old plank deck, that they never removed. As a bonus, the rest of the roof is rock solid. It didn’t need to be replaced at all, they just layered it all (and charged me extra) so it would be level with their cover-up.

I took pics and emailed the company, they called back and said it was fine. They offered to climb up and cut off the ugly parts so it would look nicer.

So, is this job as bad as I think? Does it need to be torn off and redone? And if so, how do I convince/force them to do it, while they say “it’s fine?”

Thanks for any help!

More pics, forum will only let me post one at a time… 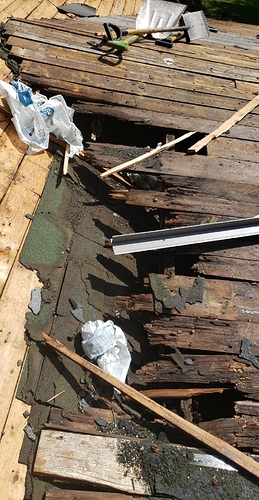 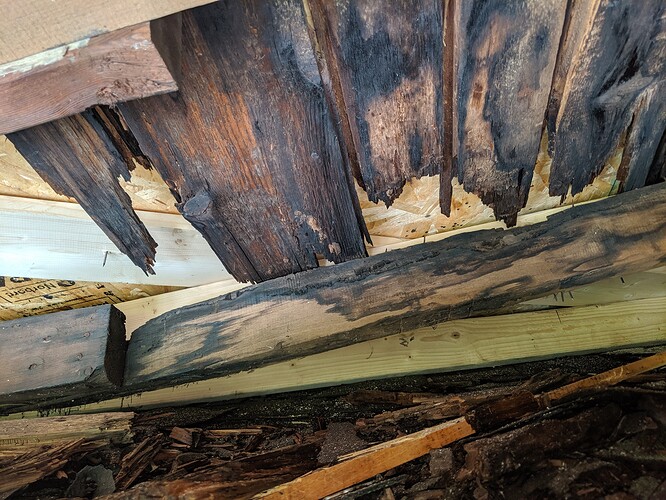 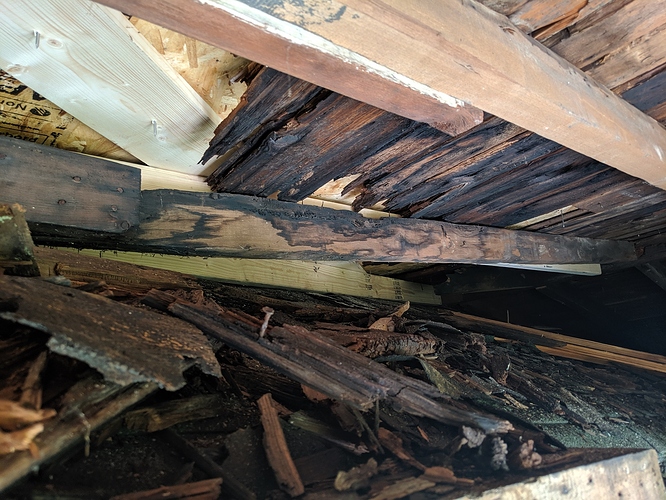 Yes, I find it lazy to not remove the bad wood. But no, I don’t think it will ever cause a problem. I don’t expect you to be able to get them to redo it. Be content if you get them to remove a few sheets so they can cut out the rot.

Why didn’t they just remove the rotted planks and replace with new planks? Looks more like 100 SF than a 1000.

I think they only meant to cut out some of the rot from below, and leave the new deck in place…

That would be okay if they can do that.

I really don’t care how it looks. If it’s structurally sound and the old rot won’t ruin the new wood, I guess that’s all I need…

What most people fail to think about is the home inspection that will happen when they go to sell. I would never allow that garbage to exist in the house I live in. Potential mold, bugs, spread of dry rot etc. They just gave a potential buyer (someday) a large hammer to use against you.

Tileman is correct. If you one day sell the home, that will be used to justify reducing their offer price.

I’m not too terribly worried about inspections or resale.

I did have to remove the ceiling to get to this. An inspector would have to do the same to find it, it’s completely hidden otherwise.

And the current plan is to sell the place next year to the girlfriend’s daughter and son-in-law, WELL below market rate. They’re not going to try to nickel and dime me, but I also don’t want to sell them future problems that should be remedied now.