Pile of shingles led to damage

I hired a roofer to re-roof my home and in the process my home has sustained considerable damage. Is there a rule of thumb of how high you should stack shingle bundles or where they should be stacked?

Common sense is the rule we use. Hope the guys has liability ins.

I have filed a claim against his insurance. He has “assured” me that his insurance will not cover the damage because “the house was built wrong”.

Would need to see pics of how high he piled his shingles and some interior pics of your roof framing to say if I consider him at fault or if it really was because of a poorly built structure.

I regularly load 20 bundle stacks every 8’ on new builds.
I have seen other crews make 2 stacks on either end of a ridge, than a 30 bunde skid gets dropped on the pile.
The only houses I won’t do that on, are hip trusses
I have seen hip trussed houses cave into a small stack of bundles 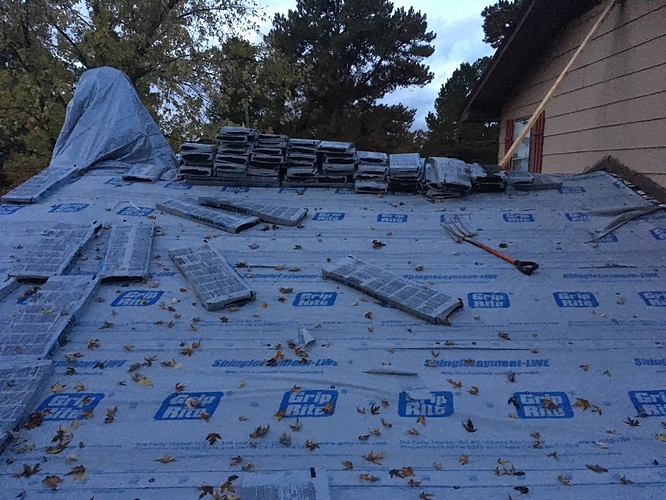 If built correctly that ridge should take that weight with no problem.

Is it rafter construction, with collar ties?

There have been some roofs in the past that I didn’t load up because I wasn’t sure of how they would take the weight.

I have a cathedral ceiling in my living room. This is the area that they stacked the shingles. 32 squares worth. The ridge is approximately 21 ft. in length. I’m guessing that the stack was no more than 16 ft long. The picture I posted was AFTER I showed them the damage and they spread some of the shingles out. Every bundle was in that pile before. 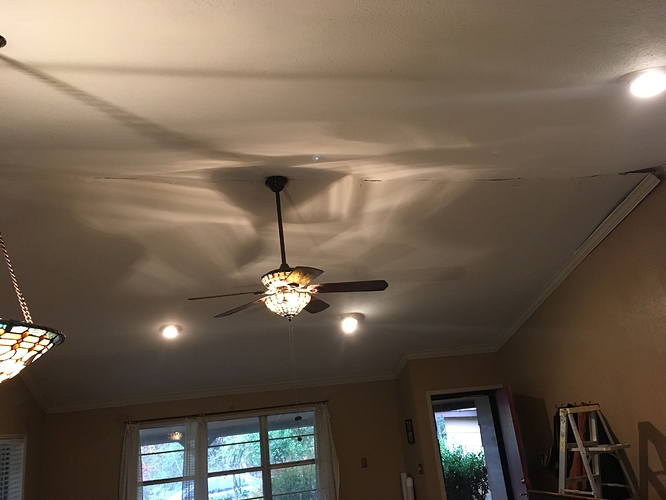 This was when I discovered the damage. 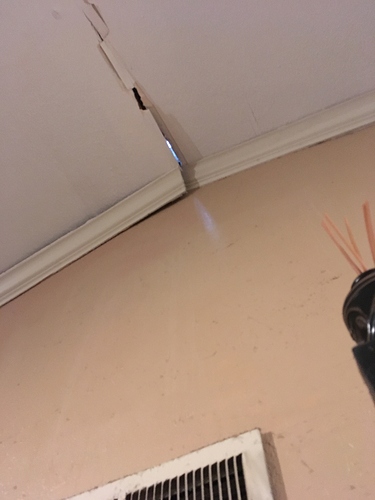 If they had 32 sq over that spot that would be a bit too much.

They have liability insurance I assume?

Yes, they have Insurance. I filed a claim on Thursday but haven’t heard anything back since.

Did they unload the shingles from that section?

The picture I posted was after they “spread them out”. They stayed like that until they started laying shingles. Before the picture, all of the shingles for the whole roof were right there. The roofers are the ones that placed all of them on that ridge. I asked the roofer if the lumber yard did it, or they (the roofers) did and hey told me that they (the roofers) moved them all up there.

What they did was complete incompetence.
They loaded the second story shingles on the first story.
First major mistake.

Also each 3 foot wide( or 42 inches)stack should be centered over 2 rafters exactly.
With one rafter in between
We stack them 6 1/3 sq high normally and push it a little further if limited ridge.

Do you know if they were setting the bundles down as opposed to dropping them or slamming them down?

At this point what is done is done, I would insist the insurance company remove all of the plywood on both sides of the slope, have a qualified consultant inspect the framing and go from there.

Not a clue as they did not notify me before starting work so I was gone when they showed up.

I’m currently waiting to hear from his Insurance company.