3 months ago I had a reputable company install a new epdm flat roof. There appear to be issues such as ponding, bubbles, and nail points. I had another roofing company look at it and they told me this was unacceptable and would shorten the life of my roof. Please advise if this is acceptable workmanship. 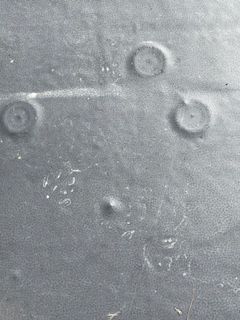 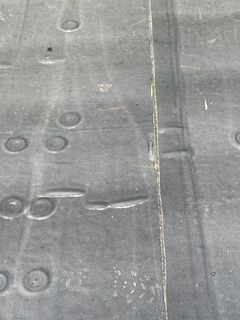 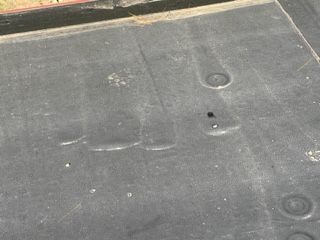 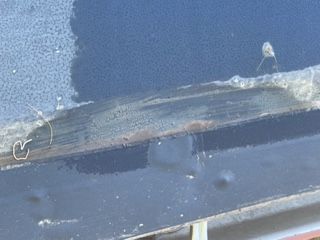 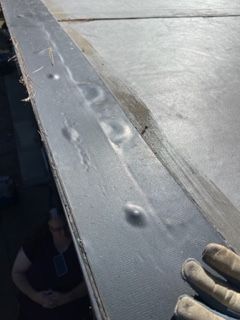 No, it is not. I’m assuming this is a fully adhered EPDM roof. Most of the “circles” you see are the plates used for the underlayment and seem to be ok. The wrinkles in the seam are not good. Nail pops from fastening the metal/nosing aren’t good nor is the one in the field of the roof.

My questions are “IF you know” questions.

I’m with Donl on this. I always have a clean deck. New decking, or on a tear off ISO board. On a fully adhered, if you use 045 you are going to get every joint, raised screw, splinter…etc telegraphing through the finish. You have to make sure it’s a clean smooth deck. ISO board, you will see the screw plates. The backed out nails and bubbles in the seams are a concern. Having a bubble in the field doesn’t bother me if it’s small. They can cut it out and patch it if you want. The ponding is a weight issue and something they should have been made aware. If it’s slight water, It doesn’t bother me. EPDM is made for ponds.
Most installations are going to tell you that nailing eave metal is fine. I’ve never done it. I run the EPDM over the edge and fasten it to the face with nails. I then put eave metal over it and use a trim screw that has a super flush head. It can still be seen thru the cover tape, but not like the ones in your photo. Those might be a concern. EPDM likes to move where it’s not fastened or adhered.
Very rare that I install any 045 of EPDM or TPO anymore. 060 is my minimum. It prevents alot of these issues. You’ll still get some telegraphing but not like 045.

Just an FYI, I’ve got some straight to the deck, boat houses that are over 25yrs old and still performing. Those were put on in the 90’s, 045 Carlisle. They sit in the sun all day, with no shade. EPDM is a good product. It’s like everything, it comes down to the installation.

Once again. I don’t know the conditions the contractor was working under. I’m just giving my opinion.
Dang!! I meant to tell this for you also. I’m at my desk so typing is easy. Louisiana Pacific used to make OSB with impressions in it. If you looked at the OSB you could see Nuts and bolts indentions, pressed into the product. It made you think they had a machine come apart during the OSB run. Some of those impressions would telegraph through the 045 and you would see it. It looked like we left some bolts and nuts under the rubber. Good times. On that note, I try to buy LP OSB over any of the others. There is a difference in the quality and thickness.

Thank you for your response.

Will try to answer questions, I am not really knowledgeable about these things.
*My contract says they used 60 mil
*They did put down new board underneath, they said what they normally used they did not have so they upgraded to a different kind of board but I can’t remember what it was.
*They came out today to address concerns and said in the multiple small circles they used screws and that they were not going to pop through. They also said they would come back and put 9 inch tape on the edges. As far as some of things that look like nail pops they said some was where stuff from shoes got underneath and should not poke through. They poked a spot in front of me and says it will go into the cushioning of decking beneath. As far as those spots and maybe the nails around edge (I am assuming nails and not screws here but will confirm when they come back) they said they would put another layer of rubber over those spots and tape good to ensure nothing pops through.
Does this sound reasonable?

good deal. Looks like they want to address your issues. Sounds like they used a Densdeck type cover board under your EPDM. You have a cured cover tape on the perimeter. It’s a pretty elastic type product. If they want to cover with a 9", I don’t see a problem with that. They used a screw so it’s probably not going to back out. What I have done on any EPDM that might receive a floor, light weight concrete or something over it, I will run cover tape over my field seams. Helps me sleep at night, but it’s very rare seam tape fails. I say that because the only seam issue I see that could be a problem is the bubble in it. Now it could be from air, or too much Tape Primer applied. Cutting it out and repairing it is very simple with EPDM. It’s the one thing that makes using this product so forgivable.
Happy to see they used .060.
Sounds like the guys don’t mind fixing your concerns. Not sure about the shoe thing or the things sticking up in the field. Pushing them down into the substrate, I’d probably cut that out and patch it. Once again, it’s easy to sit behind a screen and criticize another guys job.

Thank you so much for your insight. I really appreciate it.