I had a complete roof replacement done a few weeks ago…Upon going into my attic for the first time since completion I see the rafter vents/baffles that I paid to have installed are basically laying on top of the insulation (not pushed down into the channels like the others installed on the other side of the house)…I called the contractor (and sent him this picture) and he gave me a story about how they don’t need to be pushed down past the insulation any further and they don’t need to be stapled to the plywood…I think he’s full of it, but I wanted an opinion from someone who knows for sure before I go postal on him,Thanks in advance. 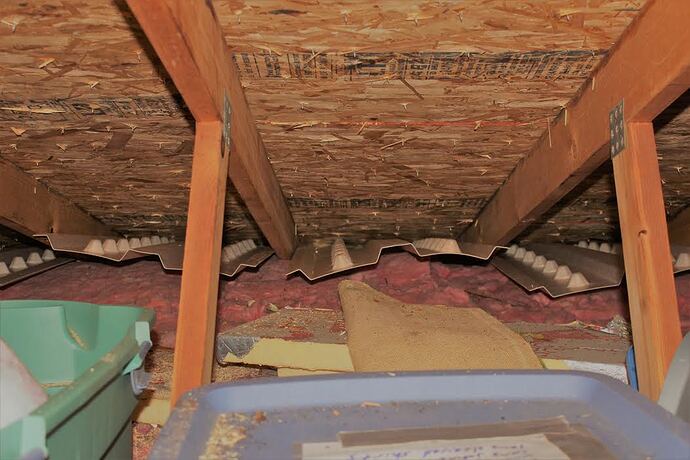 They will function fine as long as they reach into the soffit unimpeded. Stapled up would be low on my list of questions. They do nothing other then provide an air channel. Looks like a big air space to me.

I assume you are thinking the nails driven through the decking plus the vibration caused this? If so, how would you have the roofer do it any different? Would you have preferred that he staple the shingles and charged you for a man lift to avoid walking on the roof?

Thanks for the replies…I’m no expert, but the reading I did prior to installing the rafter vents stated that they should be placed into correct position and then stapled so that they stay in place…As the contractor replaced all of the plywood decking I don’t think that should have been a difficult thing to do. If I’m wrong that’s fine, but after paying $500 to have them put in (the vents themselves were $125) I would hope that they were at least in a fixed position and not laying across the attic insulation instead of in the channels where they should be.

_Dad…I’m not a roofer or a contractor, but I’m also not idiotic enough to think the shingles be stapled so as to avoid shifting of the vents.

I’m only posting this to get the thoughts / ideas of those in the know to see if my thinking that the end result needs to be revisited by the contractor that installed them.