Had new roof installed on house and garage last week. After job was over and crew was gone I walked into the garage and found large slivers of wood along with some holes as big as baseballs in the wood plank decking. Called roofer and he said that just happens when you hammer on shingles instead of nail gun.
I had paid him but put a stop on the check since his only solution was to come out the next day and take the roof off and replace busted boards. Which meant I must pay for materials AGAIN. And in my thoughts, it would give him the opportunity to just damage more boards.
The next morning I checked in the attic of my home, same scenario.
Is there a way to repair these busted boards from underneath? I told him I would not pay for materials that would be thrown in the garbage because of his crews mistakes.
I am an elderly single lady. He has called and cussed me and threatened to take me to court. I have told him I would get opinions from a couple of other roofing companies and try to find a solution to repairing boards with trashing the new materials. He wants his money now. I was willing to pay and did pay. But when I saw the damage to both roofs, I felt my only leverage was to hold payment until an agreed upon solution could be found.
Does anyone out there have any suggestions how to approach this and fairly resolve it?

Yes, this happens.
It is not a roofer “mistake”
The roofer didnt do anything wrong.

You discovered busted boards.
These boards have knot holes in them everywhere and this probably happens on every roof replacement
The roofer offered to do the right thing
And replace them.
Roofers dont do attic inspections after the roof is done so he couldnt have known.

I dont think either of you handled it well.
But He needs to be paid.
The cost to fix this is almost nothing.
A stick of 1x6 decking and a bundle of shingles.

Thank you so much roof_lover for responding. There are actually about 100 or more busted places on the roof and the garage. But I have not heard of repairing it like this. Can you describe this method in a few simple steps? The roofer would probably like to learn this method instead of removing the whole new roof. It would be great to be able to piece meal the repair instead of scrapping it all off and starting from bare roof.
And yes…pay him for his labor and material. I have never not paid for anything I have had done but I have not had a situation quite like this. Also, other roofers have never damaged the roof in this manner. I was worried that if this crew was hitting the nail hard enough to break a board, did it also damage the shingle in some way. Again, thank you for your helpful information.

100 or more places?
Really? Sounds like an exaggeration to me.
No offense.

Cordless sawzaw in the attic
Slide the blade between the damaged
1x on both sides and cut through the shingles.
So roofer will know exactly the boards to replace from the top and the least amount of shingles to replace.

LOL–I may know next to nothing about roofing but I can count to an hundred. That is why I was very shocked. 2000 sq ft living area in house and 500 sq ft in garage.
Anyway, thank you so much for the ‘how to’ on this. I can pass it by this roofer who did the work and others to see what they say of this method. I like it myself.
I will also still try to get another couple of roofers to ‘put their eyes on it.’ Since it is my home and my finances sponsoring this job, I feel I need to feel comfortable with it all.
If anyone else on this website would like to contribute, it would be greatly appreciated. The more information from other experienced roofers would be welcome.

Upload some pictures. If that many boards broke, all of the decking on the house should have been replaced, and that is not inexpensive.

Ok…here are a few shots around in the attic of the house and the garage. Tried to limit pics but wanted to give an idea of what I am seeing. That is what you guys understand and I don’t…is this much damage typical? And like I said, no other times a new roof has been put on has there been all this damage.
Not sure how many pics I can send at a time. But here goes.
Tried sending 5 at a time and was taking forever. Will try 1 then maybe 2. Thank you for your patience. 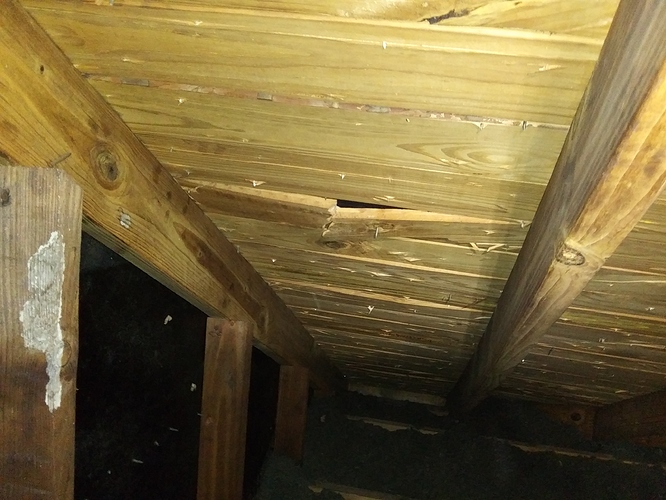 Here’s 1 more maybe. Ok just got notice new users can only send one pic at a time. 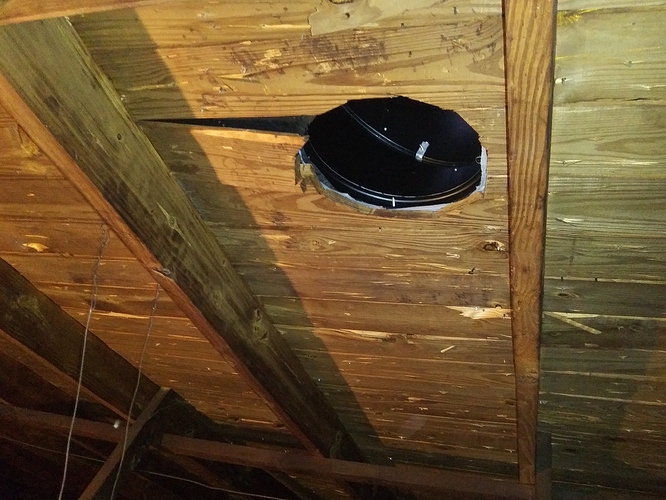 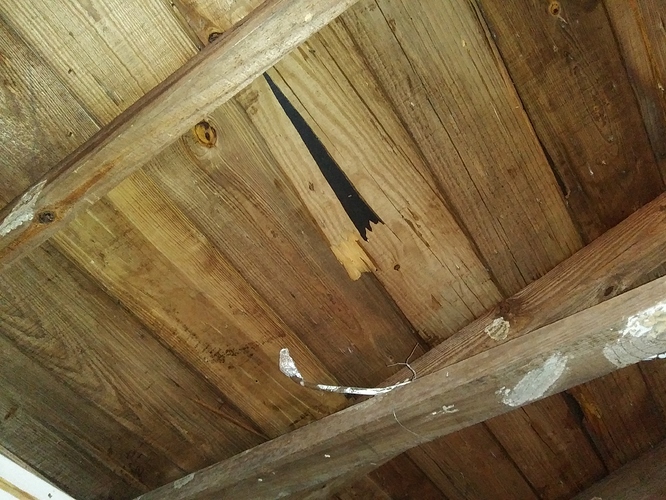 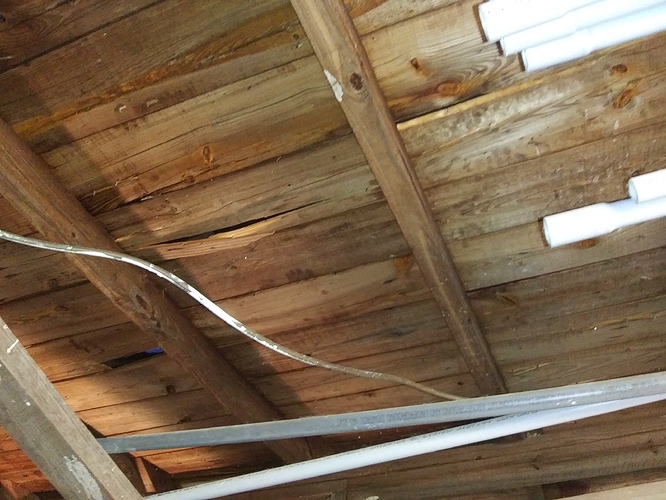 Ok…it didn’t upload that last pic. Maybe that is all I can upload for today.
I am really grateful for all of you adding your knowledge, expertise and gut feeling on this issue.
Would using a nail gun have been a better choice so as to not cause so much breakage?
Really wish I had known more about how to choose a roofer and issues with roofing.
Thanks IslandRoofing and MPA for giving information for me to learn a little more about the nature of roofing on board decking.
I actually had 14 house pics of different breakage and 9 in the garage to give a decent idea of what is throughout the buildings. But I don’t think I can get them all uploaded. Will try to do more tomorrow. Thanks to all. I want to have this move forward as quickly as possible.

Here is another pic in the house 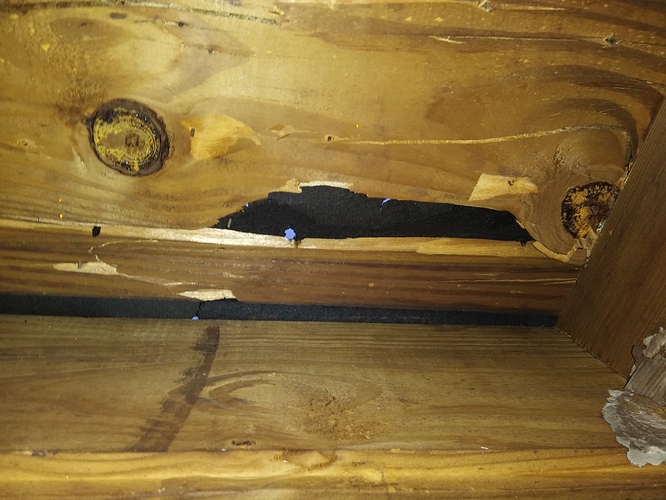 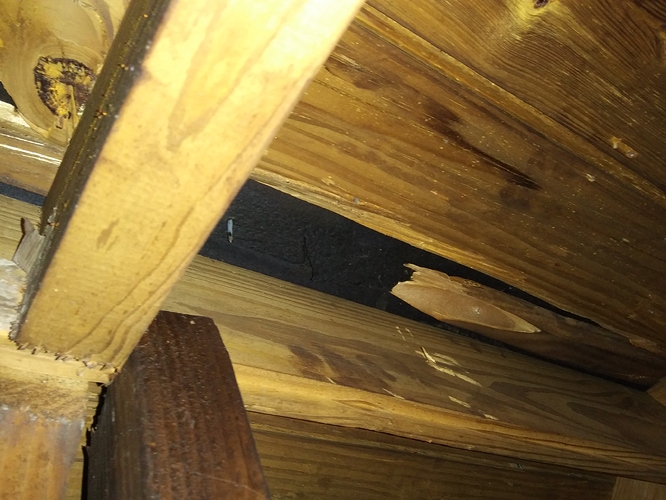 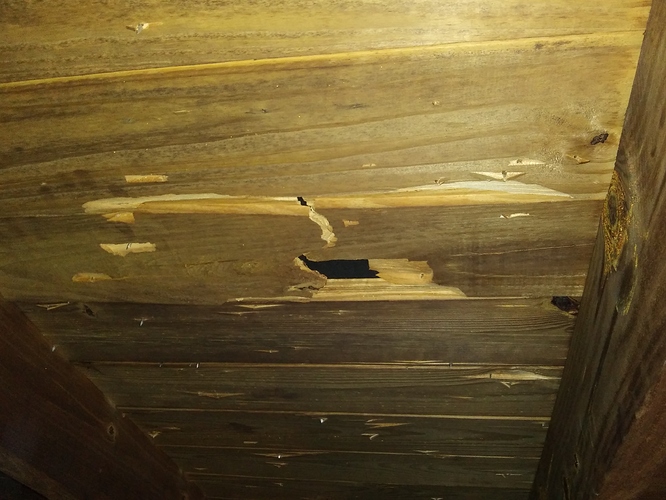 The smaller holes are a non issue but the bigger ones should be replaced. He will need to remove some shingles to do this. Let him do that as that sounds like what he wanted to do in the first place then pay him. While hand nailing shingles isn’t my preference it is perfectly acceptable so I wouldn’t bring that up. Using nail guns/vs hand nailing both have their pros and cons.

Thank you IslandRoofing. I wasn’t counting those little splinter kind of breakage…just the stuff that mainly shows a good portion of felt or underlayment. I spoke with a well respected roofer who is in the area (but very expensive is why I did not use him) and he suggested getting a home inspector to check the roof for any faults. That would curtail any future issues if there might be some. Would you have a comment on that?

Looks to be a 1x deck in poor enough shape that would have warranted a re deck with either OSB or plywood to make for a good finished product. The excessive amount of time spent pulling and patching so many spots and still having a comprised substrate is better put towards installing a fresh nailing surface.
I do remember when first starting out dreading that conversation with my client that there will have to be more money spent but i find now that most homeowners appreciate having things done properly rather than have anything skipped over.
That said i think anyone who couldn’t spot these weak spots before proceeding to put underlay/shingles on shouldn’t be installing with either the hand sledge they must have used or a pneumatic nailer lol
Any pictures fr the top side?

The home inspectors in my area don’t have a clue about roofing and we regularly need to correct bad information given to homeowners from them on this website. I wouldn’t put any merit on anything said by a home inspector. This isn’t what you wanna hear but if this “well respected” roofer in your area was “very expensive” and you went with a cheap guy it may just be a case of you getting what you paid for. How much cheaper was this guy?