They did this damage and walked away, saying they are not responsible for siding damage. 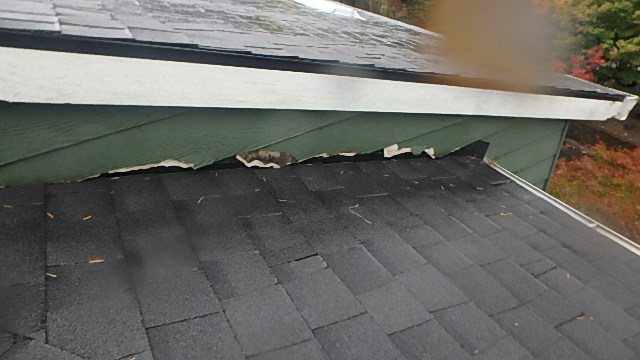 I can’t tell from the pic but is that siding rotten? If so then the roofers are not responsible for rotten siding falling apart when they are having to remove and replace shingles in direct contact with it.

Thanks for the reply.

It’s HardiePlank, and they ripped off the bottom of the board like that in order to tuck the new flashing up under it. It was not rotten.

WOW!!! The roofers are absolutely responsible for that hack job to the siding. I don’t see any step flashing which should be a big red flag. The roofers should pay for the damaged siding, paint the damaged elevations so that appears to be the front left and rear elevations of siding. The paint on the siding appears to be newer. I thought nothing surprises me anymore but this sure does. It looks like the shingles are butted up against the siding and the underlayment is up the wall if there was flashing is should be visible where the siding is missing. I hope you haven’t paid them the full amount. Good Luck in getting them to do the right thing.

How did you discover the damage to the siding?

Oh, yes, that might just be underlayment. So that should definitely be step flashing? I’ll look into this.

Yes, there should be a step flashing for every course of shingles.

I cannot tell from picture if there is step flashing. I cannot believe they left that as a finished product. We would have removed and reinstalled or replaced the hardy, and had that in the contract upfront. I hope there is black step flashing in there for as much damage as they did. Hardy is not like vinyl siding, to install new step flashings it needs to be removed, there is no tucking behind if it is nailed properly.

That is a situation where it would have been better to reuse the old steps, if there were any, if they were in good condition. If they needed to get flashing back there, they should have discussed the options with you before doing what they did.

I just noticed how tight the remaining siding is butted to the shingles. If they do end up replacing the siding it should be end primed and held up 3/4" from the shingle to prevent it from wicking water. I have seen hardi fail multiple times from being butted right to shingles.

They need to be taken out into an open field and shot.

Hardie plank is supposed to be installed 1 to 2 inches off the roof decking so it won’t absorb water flowing. How tight it is to the roof deck it is very likely that the siding was just crumbling. I’d call the guy who installed the siding and show him the hardie handbook lol. the black there may be ice and water, but I know when we do hardie, since it has to be off the roof decking we cover the flashing with a 10in flashing extension that is black, and that may be what your seeing. as well as the kickout at the bottom, at least he got that right.
Although the roofer should have let you know the siding was damaged, or preferably before the install that it would likely occur.

For the love of Pete, it’s HARDIE; not HARDY. Good friggin’ grief.

And, yes, the roofers screwed up your Hardie siding.

Thanks to all you guys for the info. This is my first re-roof, and I’ve learned a bunch of stuff, not all happy stuff.

That original Hardie Plank is too close to the shingles, but that’s original construction, so I don’t blame the roofers. But can’t believe they ripped it up like that. Replacement quote is 1500-2400 dollars, and roofers are telling us that is our cost, but…jeez.

Is that the only area where the siding is damaged? If so the easiest fix at this point would be to nail a strip of hardie (maybe 2" x3/4") or so parallel with the roof over the damaged area and paint it to match. It isn’t by the book but under an overhang like that I would be confident it wouldn’t cause any issue.

The other way to correct it world be to saw cut the bottom 4" off of the siding, slide a z flashing behind it and an Azek 1x4 along the roof. That is how I prefer to do new hardie installs when meeting a roof.

It wouldn’t be all that difficult or expensive to just remove and replace with new, if they were intending to install step flashing they should have planned on this.

Hardie plank almost always needs to be removed to work with it and it’s a major pita.

I don’t think your roofer handled it correctly but I also don’t think they’re responsible. Looks like all the cupping is on the bottom of the Hardie siding. It likely was installed incorrectly in the beginning and wicked water for years. I’m not sure what you call it, maybe delaminating, but Hardie board will crumble under those circumstances.

I agree with island roofing. Cut the bottom of the existing Hardie siding up the width of the replacement board plus an inch. Install a new piece that runs parallel to the slope of the roof. Prime and paint. Should be fine.

The roofer should have had a pre job checklist that covered this potential problem and set your expectations properly. They should have showed you what happened and provided a solution for the repair.

+1 on cut it back and install a pvc board in its place.
It’s a better spec,keeps the siding out of harms way and makes replacing the flashing next time more simple.

How are they supposed to cut the siding when it runs up under the soffit?

The soffit will need to be removed to do this, the siding also probably.

I use an oscillating tool for that. Obviously it can’t cut siding that runs into soffit, but it can cut very close to the end. Usually close enough.
Absolutely sucks to do and usually kills an expensive Blade or 2
Even the good blades are useless after cutting a nail

So your solution is to halfass it?

What about all the other walls that will no longer match, do you do all of them also?