We are having a roof installed on our 2000 square foot ranch. Shingles were delivered on Thurs April 26th and stacked along the front ridge of our home. The entire span across 3-4 high bent over ridge. In the last few days we have noticed serious cracking on our vaulted ceiling in the great room. To the point where you can make out some full pieces of drywall as the cracks go all the way around. Also a saucer sized water spot and some brown around cracks. The worst cracks are at the peak it seems but are all over the ceiling. I learned that it’s a lot of weight to be sitting on the peak. The job is about 1/2 way done.

I contacted the company over the weekend and they are coming to meet me tomorrow. I am not sure what I need to ask about. We have a trussed rood which I can’t see the trusses due to the vaulted ceiling. I am certain they will offer to fix cracks, however, should I have any concerns about the trusses and if they have been compromised. What should I request is done to check. Would the building department help me? My neighbor suggested calling my homeowners insurance, though I am not sure that is necessary. By the way the shingles are still sitting there, they did not move them. They are over 1/2 my roof directly over the great room.

I forgot to add the shingles are Pinnacle Pristine, if it helps to know the weight. Also they cut the ridge vent out for the whole roof first and covered with whatever that black plastic is. So , I am guessing that might be the cause of the leak? On one part of the house the width of plastic is flapping in the breeze. The ridge venting boxes are untouched on the ground.

take alota pics. if it is roofers issue it will help your case. also just googling the shingles you can find the weight per bundle, you do the math. plus pics of damage would help so we can direct you

Were it my house, I would require that either all the decking be removed, and replaced with new, in order to check out the framing. The other alternative would be to remove all the drywall on the ceiling to check the framing. I prefer the former, it will allow for a better and easier inspection of the framing I would think. I would require them to pay for a structural engineer of your choosing to check out the framing and certify it is okay. Of course, they will have to repair all the interior damage.

I do not agree with the roof loading of material for this vey reason. The representative should have seen you had a cathedral ceiling and instructed against the roof loading. I suspect your framing did not sustain damage but if it were my home, I’d want to know for sure. Further, if you don’t check now and find out five years from now you have framing issues, it will be difficult to go back on the contractor for relief.

Not good. Inexperuence. I see crews do it all the time. Truss systems have a deflection rate. I bet you willl find your walls are pushing out of plumb if it’s opening cracks that large. I’ve seen it happen. 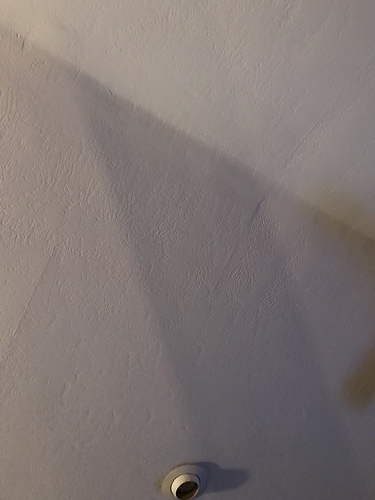 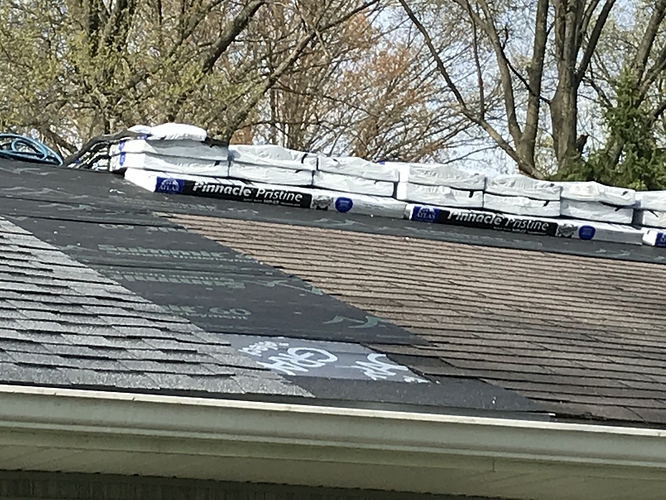 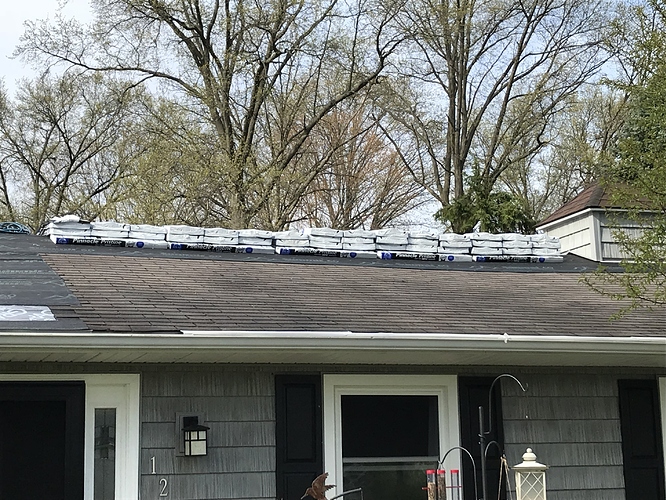 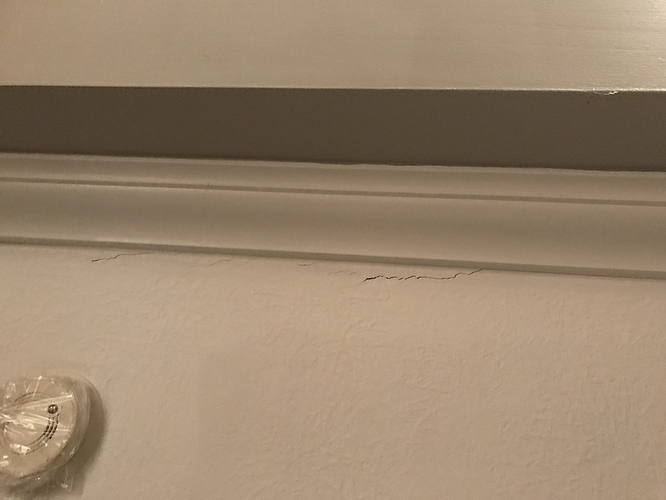 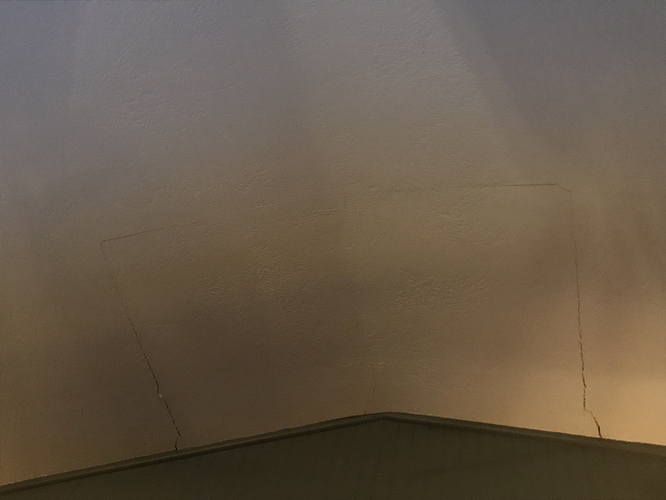 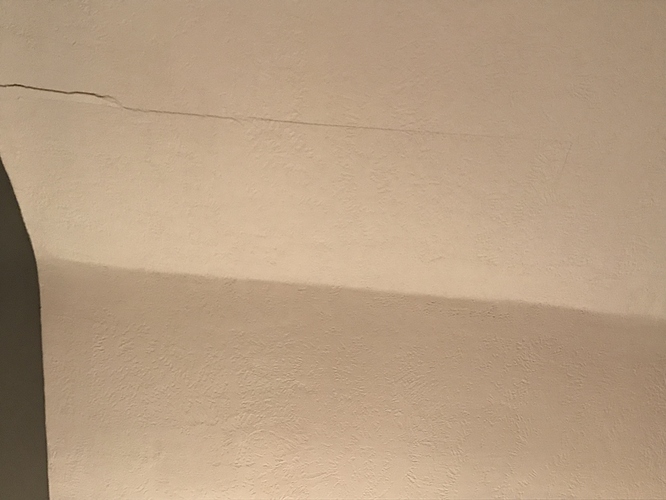 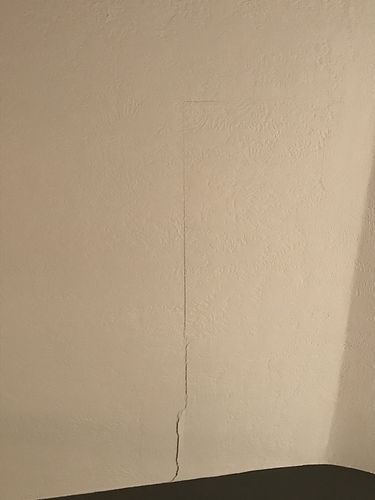 Those shingles are properly roof loaded and there is not an excessive amount on the ridge.

The ridge should easily support 3x what is up there.

If that is causing cracking in the drywall your house isn’t built to code.

Now if they have been dropping the bundles or slamming them down onto the roof there could be issues, but it should still be able to take it.

Are you sure those cracks weren’t already there, like maybe from the house settling?

We had our living room walls and ceiling painted a few months ago and the ceiling was perfect. There were no cracks till the shingles sat there for a week, there was also not a water spot. Our house was built in about 40 years ago so it was built to code for that time - not current. The contracting company saw the ceiling walls as they put in windows about a month ago so they know there were no cracks as we all were looking at what a great job the painters had done together when they were installing the windows.

I’m afraid of issues down the road as well. There isn’t a building permit but I’m wondering if our building inspector would be of any help if I called them. I’m guessing these guys are not going to want to peel back the wood or the ceiling. (Just a hunch)

As Axiom said, there are no problems with those shingle stacks at all.

And I have to tell you, i Hate cathedral ceilings and ridge vent.
Too many problems seem to happen to the ceiling.

Ridge vent already tremondously takes away from the rigidity and structure of any frame work.
Kind of exactly what the bottom of your trusses would look like if you removed the fascia for a while.
Its not truly framed in anymore.

Now a house framed in from the beginning to accept ridgevent with no cathedral ceiling 6 to 8 inches below?? That is awesome.

My biggest issue would be Why are material on job for 10 days for a one day job?
And it doesnt sound like guys are about to finish job today. Some rep is just coming to talk about it??
This company is asking for problems!!!
What is holding them from finishing this job?

They recommended the ridge vent. Wasn’t my idea - they told me I needed the ventilation. It is taking forever because the guys doing the roof only come for 3-4 hours a day and there are only two of them. They spent a lot of days on that ridge vent then started shingles. I just missed the visit of the owners and the roofers (someone else was home) the guys I paid to do the job are mad because they just put windows in a month ago and our ceiling was perfect (which they saw) and they said it has to be the weight. The roofers (who they sub contracted) said it isn’t the weight. I reached out to a few truss makers in the state who said it’s the weight and there should not be damage to the trusses however do not fix before the weight is removed as the walls will crack more after the weight removed. They didn’t seem surprised at all about the ceiling cracking when that much weight is stacked on them.

They were forced to speak in generalities… .But here is a quote from a truss maker…Typically trusses in our area are loaded for 50 pounds per square foot as a uniform load across the entire truss. It’s unlikely the trusses are loaded to carry this kind of a concentrated load at the ridge.

Your photo, vs the slope, don’t appear to be a truss system. If it were a truss it would be the smallest scissor truss I’ve ever seen. Looks like you have a ridge pole. The framing has no collar ties, so the ridge being stacked is causing the ridge pole to sink, thus pushing the rafters that are sitting on the plate. I’m guessing, because I can’t see in the envelope, but from the photos, this is not a good circumstance.

Looks like the new shingles are being racked, that doesn’t meet manufacturers specs for proper install.

I agree with roofarama, defently appears to be a conventional frames house, most likely 2x6 or 2x8 rafters.

I would have them remove the bundles asap, if they already havent. Have the owner of the company come out to see if they want to eat it or file a claim with their insurance company.

Personally I would recommend removing the drywall, inspect the fraiming, and once deemed sound have them finish replacing the roof, only loading bundles as needed. Once the roof is completed then complete the interior work. When drywall seams are broken free to that extent re rocking the ceiling is the best option from my experience.

2 guys working on the roof for 3-4 hours a day…
Sub contracted from another construction company?
Im betting it is not even a real roofing company.
Insurance? hahaha
Tear down all the ceiling? Hahahahaha
No.
Drywall/finish man can come and fix all that up, no problem.

Conventionally framed cathedral roof with a drywall ceiling??
This would probably have happened to anyone.
Im betting the whole ceiling was visually vibrating from the inside with every shingle bundle drop.
The framing didnt break/split fall apart.
Tearing down the whole celing to “inspect” the framing would be a complete waste of money/time resources.

Only question should be who pays for the drywall/finish man to fix it.

By the way, no conventional framed cathedral ceiling should really have drywall on it.
It should be with a Tongue and groove wood/laminate.
Ask any long time successful builder.

This problem didnt happen because
“All the weight”

This is the roofer’s problem period. They decided to roof load the materials without properly checking the structure. It doesn’t matter if it is properly roof loaded or not. Assuming the ceiling cracks weren’t already there, and I doubt they were from the looks of it, the roof loading caused the problem. The roofer made the decision to load the materials on the roof.

It sounds like the other problem is the homeowner did a very poor job choosing the contractor. From the sounds of it, those guys are a bunch of clowns.

We load over a thousand houses per year and I can tell you this is not accessive weight, or poor loading. Unfortunately poorly built homes are not that uncommon and I’ve collapsed more than my share over the years, but never one that was properly built!

The roofer obviously knew this section was vaulted, but had no X-ray vision to see how it was constructed! We take for granted that a house was built by someone who knew what they were doing, and did it right. Also I doubt seriously that these are trusses given the age and vault. I would insist the the roof be unloaded ASAP as it will continue to get worse. I would then call my insurance co and have the start a claim and get a structural engineer out to asses the structure. Your ins company will (with the engineer) if the roofer is at fault and subrogate to their ins carrier if needed. Get the roofers ins info (Which you should already have) to have on file if it all goes south.

A ridge vent without venting at the eaves and a space between the ceiling insulation and the roof deck (propa-vent) for air flow is a waste of time and money. From your photo it looks like the shingles were “stacked” not stepped back. This is a violation of most installation guidelines and could void manufacture’s warrenties. Is the entire roof covered in ice and water shield? I believe that’s not good roofing practice.