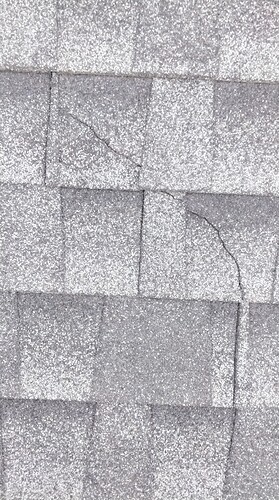 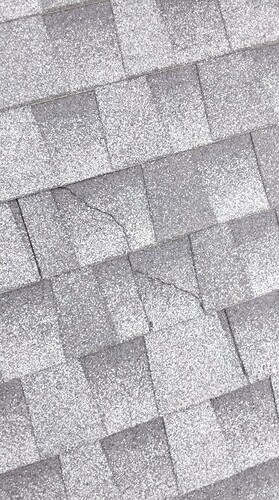 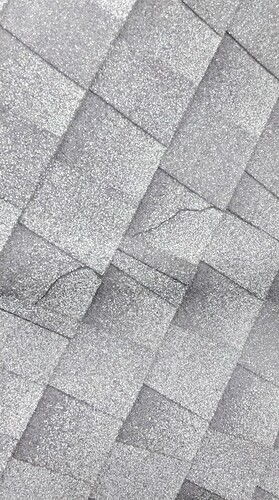 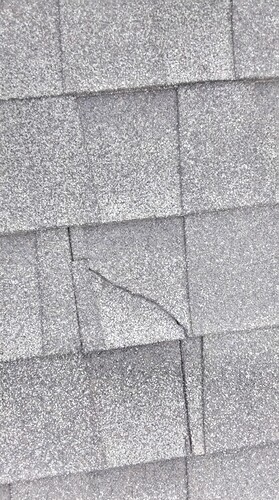 It looks like tearing caused by a defective sealant strip.

I have never seen hail do that and would look at product failure and/or mechanical damage as the initial suspects. Maybe the product was installed during the colder months and the sealing strips could have become contaminated and never sealed properly. Winds comes along and stress fractures developed eventually leading to cracking? Maybe a bad batch of asphalt when the shingles were made? Was the roof ever shovelled to remove snow by “Jake and Dave’s” mid-winter roof shovelling service?

Get the homeowner to confirm product type, along with proof of purchase, and call out the manufacturer’s rep to determine whether it is a defective product as a first step. It’s remarkable what some homeowners forget to mention leaving you to battle like a fool for something they forgot to disclose.

Reminds me of the bad genstar shingles back in the day. They would crack at the plywood joints from minor mechanical movement of the deck.

Yea that genstar was crap, the shingles are sealed and those cracks run through several courses at a time, don’t see any divets that would surely suggest hail, but it certainly isn’t normal wear. The neighbors had hail damage several years ago and some roofs were replaced but these homeowners didn’t have anyone come and check it out, I informed the insurance Co. And sent them pictures but they don’t want to cover anything anyway they just want that premium pd. Pretty sure you know how that works. Thanks for your response.

Gaf 3 tab did the same thing, ‘lightning strikes’ in a diagonal pattern from gutter to ridge. I loved those warranty jobs and Gaf is barely better nowadays. At least they are guaranteed to last 50 years though. How anyone says that with a straight face I will never figure out.

Never saw that, those must have come from a different plant than the one that supplies my area.

Sorry should have clarified that was around 30 years ago. In my opinion it has barely improved since, other than the fact that it doesn’t actually split.

If you’re talking about 5he genstar, that’s about how long it’s been since I used them. They would desalination, and just weren’t good. Haven’t used them since

Thermal cracking. Expansion and contraction causes this. Usually occurred in the shingle at a point right above where the two shingles in the course below meet. What part of the country is this in?

This is in Northern Wyoming

I have to edit this. Looks like the shingle was bent, down during install. If this was a failure after install, I don’t think the dragons tooth would be torn. The bottom laminate would slide under it. Pull it off and look at it. Either way. Not damaged by storm, so no claim.

wnks for the reply, there are areas all over the roof like the photo shows and they go through several courses. Can’t imagine someone having that much talent to put on damaged shingles to where the the cracks line up perfectly through several courses at a time. Just looked like some kind of impact damage that would have had to happen in cold weather in order to break the shingles. The thermal damage theory might be something to think about but it only happened on this home? Doesn’t make sense. Don’t know

I am in Southern Wyoming. I have seen this strange cracking on several roofs…. We get extremely cold weather here, like -10, -20. High 80s in summer. 70+ mph winds on a regular basis. The wind just rips the shingles right off here…if it was wind damage they would crack in the other direction. And we don’t really get hail here at all. I think the thermal cracking or maybe cold weather install is the answer.

MKM, did you inspect the underside of the deck in that area?

There is no damage to the deck,I doubt seriously that their is any leakage, it just irritates me that people 80 years old can’t get any help from their insurance Co. After paying outrageous premiums for years, it’s obviously some kind of damage due to a natural phenomenon, nobody could have put that roof on and lined up damaged shingles that perfectly

IT’S THERMAL CRACKING due to movement thru heat and cold. Not that uncommon in some parts of the country. An aggressive seal strip doesn’t allow the shingle to move, that’s why the crack at the joint of the proceeding course. The adjuster is CORRECT, it’s not storm damage!!!
End rant

Sorry, the adjuster is correct. No storm damage

Looks like thermal cracking to me as well. I don’t see any potential for an insurance claim unless you happen to draw a very friendly adjuster. I’d never tell a homeowner to file for that.